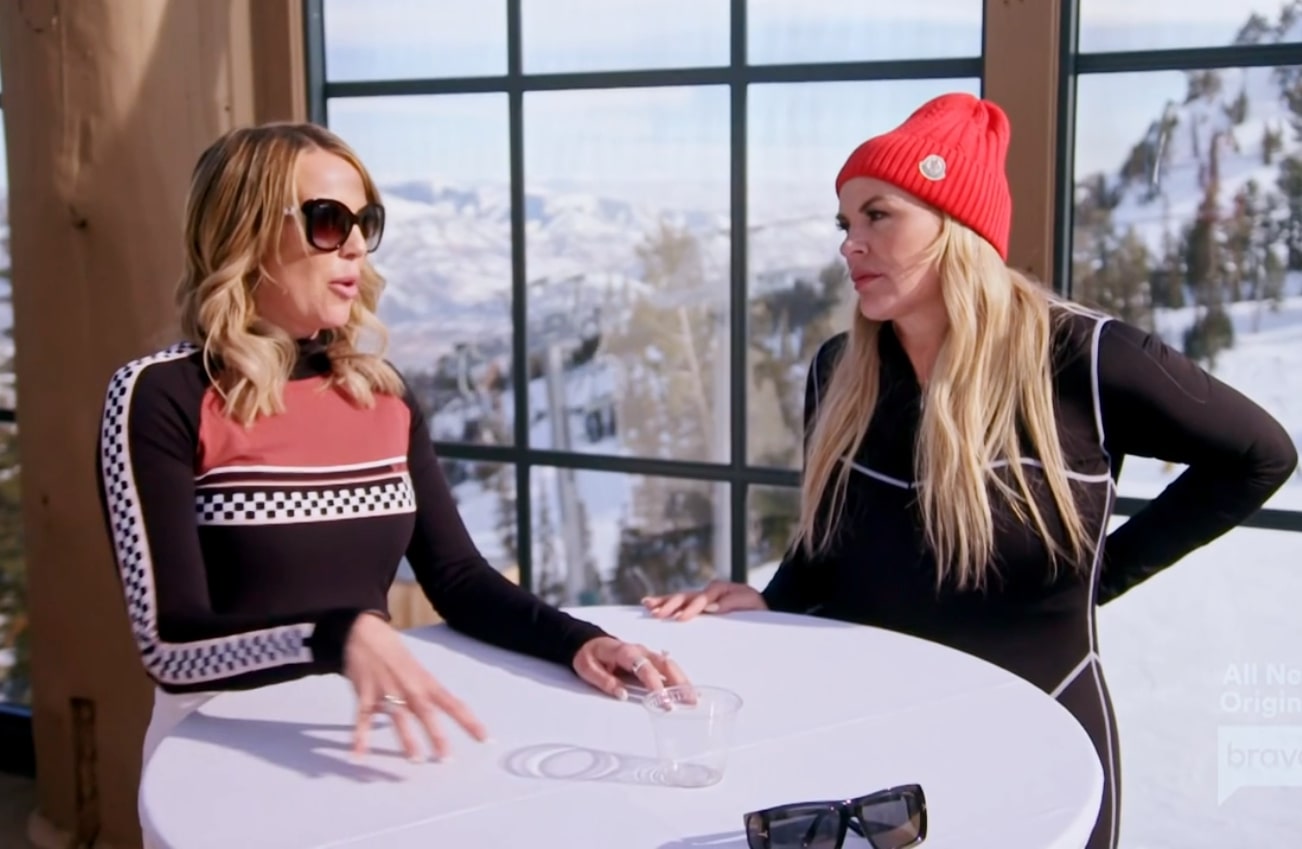 On this episode of the Real Housewives Of Salt Lake City, it’s Heather‘s turn to be the pot stirrer.  She enlists the help of her old pal, Angie Harrington, to debunk Whitney’s rumors about Lisa.  Plus, Jen learns that her trial has been pushed back until July. After all of that pre-trial work in NYC (Meredith‘s stomping grounds *wink, wink*), Jen is forced to take a step back and focus on the future.

Lisa is busy “working out” with her husband, John, who is less than thrilled with Lisa’s frantic phone calls to him during her girls’ trip.  John laughs off the lies that Angie H. helped to create and does his best to listen to Lisa work through the drama surrounding her. Lisa says that Whitney won her over with the bad truth and even though the words were rough, Lisa promises that she will always remember Whitney doing the right thing.

Whitney chats with her husband about her reconnection with her half-siblings and feels as though spending time with them has helped her along her healing journey. She is coming to a place where she can leave the trauma in her past. Whitney is also doing her best to reconcile with Heather and feels like Heather did not give her a voice. Whitney sees connects this situation with her childhood and sees parallels to be silenced.

Heather pays a visit to Angie H., who enters with martinis, ready to hear all the details about the Arizona trip.  An overly eager Heather is ready to spill.  She relays the story to Angie and claims she wasn’t expecting Whitney to throw Angie under the bus.

Angie denies ever saying anything like that about Lisa at the Jazz game and reminds Heather that was a business environment. Angie tells Heather that she doesn’t want another issue with Lisa, but she knows Whitney is quite a pot stirrer…

Heather tells Angie that she wants to move on, so she has planned a girls’ ski day.  She has chosen to invite Angie because she wants to watch Whitney squirm (LOL) and she is also inviting all of her Mormon cousins.  She explains that she is “balancing her true feelings” and since her writing book, Bad Mormon, she feels like she really opens up to them about her truth before they read it themselves.

Meredith and Seth head out to meet everyone’s favorite, Brooks. He is back from NYU and jokes about having a boyfriend for the past two years. Seth claims Brett Favre would be his perfect boyfriend and Brooks talks about being set-up by his aunt.  Meredith shares that her sister, Brooks’ aunt, has started a charity and Meredith has decided to host a fashion show to raise money. A future group event, for sure.

Over at the Shah house, Jen talks about her draining trip to NYC and how her legal team has been preparing her to spew lies and be on the defensive. It feels good to be back home with Coach. They practice some couple’s therapy soul-gazing and Jen talks about how overwhelmed she is since learning her trial is pushed back until July. She is tired of being questioned and she just wants to get the trial over with so she can move on with her life. Coach is a great husband, who may or may not have known about his wife’s shady deals, but he is certainly supportive and loving towards Jen.

Lisa calls her brother, Brian, the only boy in her family. Lisa shares that Brian and Lisa are the only married siblings and she is overwhelmed about her sisters’ recent divorces. Lisa is stressed about her family and her friend group and suggests that maybe she start doing more things with John to help keep things back on track in her life. Clearly the rumors are affecting her.

Whitney is excited that today is the day her LDS chapter is officially closed.  Turns out that Whitney needs a notary to sign off on the paperwork from quitmormon.com. Yes, that’s real. Whitney explains that she has tried to leave the church 3 times. After cheating on her husband and asking for a divorce, she was not even ex-communicated, a decision that showed Whitney that the church had ulterior motives of control. According to the church, women do not have a say and the men are the ones who have the final word.  Whitney states that she is taking back her power and she can see the similarities in her childhood abuse and the church.

It’s the day of Heather’s ski trip and she greets her cousins and friends, excited for a day on the slopes. WTF did Heather write about in her book that she is buttering up her cousins so much like this?! In the meantime, Whitney and Lisa, new-found besties, travel together.  Whitney shares that she hasn’t talked to Heather yet and feels like her vulnerability was being used against her.

Jen Shah is awfully chipper as she strolls up and promises to be bartending on the bunny hill. As Lisa begins to see who is mingling in the group, she can hardly believe her eyes when she sees Angie Harrington amidst the group of women. Angie tries to hug Lisa hello, but Lisa knows it’s a scam.  She calls Angie fake and wonders why Heather would bring her into the mix, especially if they are trying to get to a good place.

The ladies split up and Lisa and Jen hit the bunny slope.  They discuss their love of beaches and talk about Angie H. Lisa is more than ok with ending the friendship with Angie, but tells Jen that she cannot wrap her mind around why Heather would invite Angie here.

After some skiing, the group comes back together, and we hear all about Jen’s trial. July 11 seems so far away and Lisa and Jen joke about staying in the Hamptons while the trial takes place.  Whitney is appalled by the laughter since more time simply means more time for the prosecution to gather more information against Jen.

Angie makes her way over to Whitney who says, “the problem is, we [Heather and I] got tripped up on details.” Angie tells Whitney that she would own it if she remembered the details about Lisa, and Whitney expects that from Angie, who she considers to be a liar…

Heather explains that she wanted to bring all of the worlds together and she pulls Lisa aside. Heather claims that she “didn’t even think about” Lisa or “consider” her when including Angie on the guest list, which came out terribly. Heather apologizes to Lisa and all seems okay until Angie asks Lisa to talk. Lisa refuses and is not interested in hearing more lies about her relationship. Lisa feels stabbed in the back by Angie and rightly so.

Whitney then asks Heather to talk because this appears to be the time and place to do so.  Whitney tells Heather that their fight was over “details.”  Heather promises that if she could, she would have corroborated Whitney’s story and she didn’t want to leave her high and dry.  The truth was, Heather sincerely does not remember that conversation happening at the Jazz game.

Whitney did not appreciate Heather “weaponizing” her pain and wants Heather to know she was hurt.  Whitney is not sure Heather is really hearing her and lets Heather know that it’s gonna take her some time to trust her again. Will Bad Weather come again soon or is this friendship between the cousins really over?

TELL US – WHAT DID YOU THINK OF THE EPISODE?

Is The Panera Bread Sip Club The Solution To The Latte Factor?