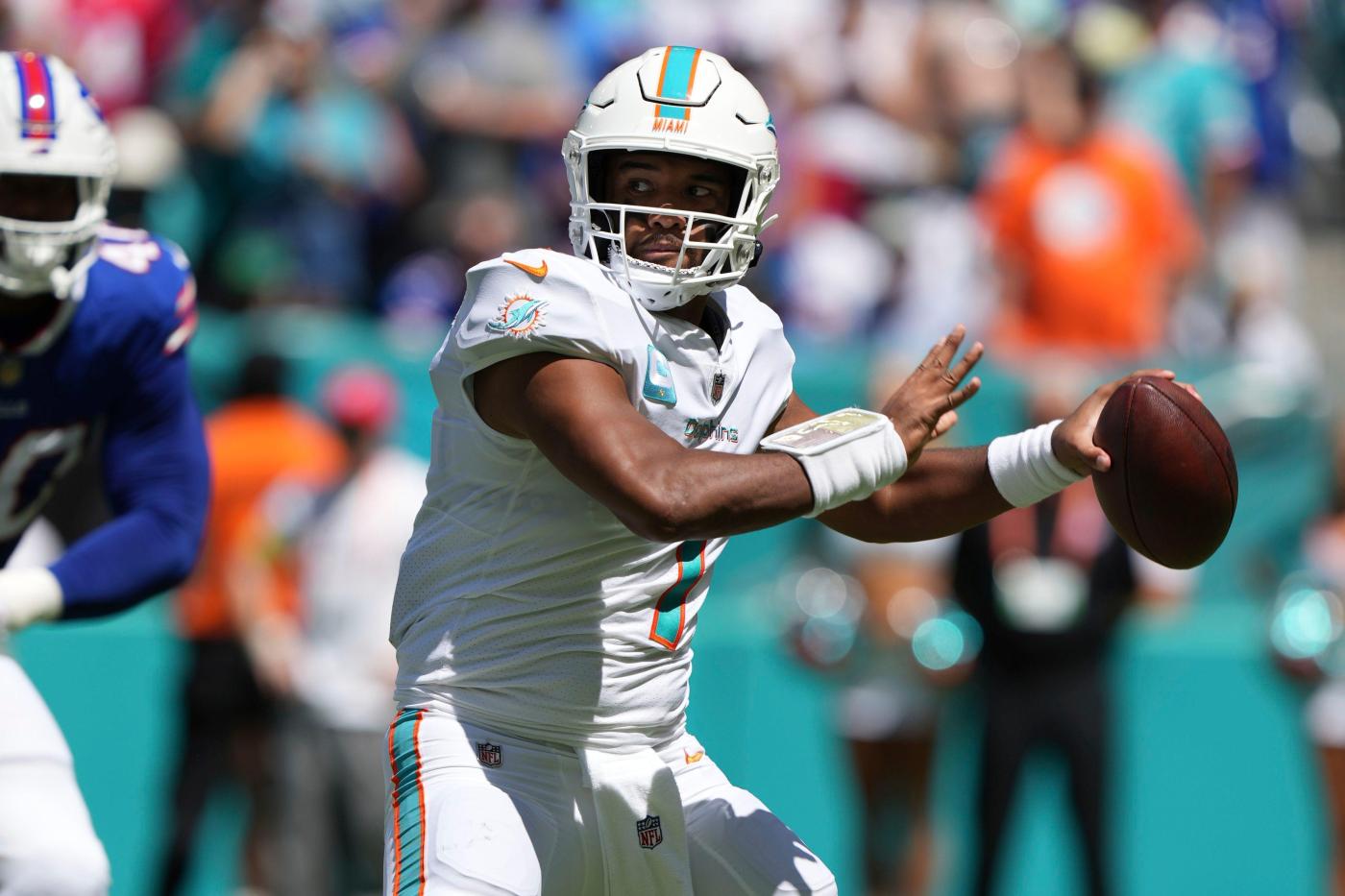 Miami Dolphins quarterback Tua Tagovailoa is officially questionable to play through his back and ankle injuries in Thursday night’s game at the Cincinnati Bengals.

Tagovailoa was originally deemed questionable by Mike McDaniel when the Dolphins coach spoke to reporters on Tuesday, but Tagovailoa said “the plan” was for him to play.

Miami’s quarterback left Sunday’s win over the Buffalo Bills at the first half’s two-minute warning after falling onto his back and having the back of his head hit the ground in a whiplash effect due to a late push from Bills linebacker Matt Milano after Tagovailoa threw a pass.

Tagovailoa appeared woozy and stumbled after getting up from the hit that drew a roughing-the-passer penalty. He was checked on the field, went into the locker room and got cleared through concussion protocol to return for the second half. He finished the 21-19 win 13 of 18 for 186 yards and a touchdown.

After the game, both Tagovailoa and McDaniel said it was actually a back injury that caused the quarterback to go down and later stumble — not head injury, as was originally announced by the team. Nonetheless, the NFL Players Association is investigating Tagovailoa’s concussion check. On Monday, McDaniel revealed there was also an ankle issue for Miami’s third-year signal-caller, but Tagovailoa said Tuesday the back was the bigger issue.

McDaniel expressed optimism on Tuesday in Tagovailoa’s availability based on a phone conversation they had late Monday night.

“Just him talking to me, I can tell in his voice, he is literally going to do everything he can and in his power,” McDaniel said. “I’ll know that, if he doesn’t play, it literally was not possible. Happy with the way he has so far progressed. Feel very optimistic because of how he’s going about it.”

Added Tagovailoa: “I’ve been up here getting treatment, doing everything I can to get as close to 100 percent as possible.”

Injured Dolphins’ practice participation statuses listed on the team’s injury report for Monday through Wednesday are all estimations as Miami did not practice on Monday and held walkthroughs on Tuesday and Wednesday. Tagovailoa, Waddle, Howard and Jones were listed as limited participants on Tuesday and Wednesday after being estimated as non-participants on Monday. The team also moved up its flight to Cincinnati from Wednesday afternoon to Wednesday morning due to Hurricane Ian.

Howard and Jones were part of a Miami defense has the travel and short turnaround after the unit was on the field for more than 90 snaps in South Florida’s heat and humidity on Sunday against the Bills. Davis missed the game against Buffalo with the knee injury but could return Thursday.

The Dolphins also have reserve tight ends Hunter Long (ankle) and Cethan Carter (concussion) out for Thursday. The team said on Wednesday morning Carter did not travel with the team. Carter is still in concussion protocol after a blow to the head on a second-quarter kickoff in Miami’s Sept. 11 opener against the New England Patriots.

Miami has not announced a practice-squad elevation to the game-day roster, but according to a league source Wednesday evening wide receiver River Cracraft is signing to the team’s active roster. For a Thursday night game, a team has a Thursday 4 p.m. deadline to make elevations from the practice squad.

The Dolphins used their allotment of three practice-squad elevations on Cracraft in the first three weeks of the regular season. That’s the maximum allowed by 2022 NFL rules before a team has to sign a player to the active roster should it want to bring him up for a fourth game.

If the Dolphins then want to send Cracraft back to the practice squad later on, they would have to release him to then sign him back. Between the two transactions, however, he would be eligible to be claimed off waivers by other NFL teams.

Miami doesn’t have to make a corresponding move in signing Cracraft since it has an open spot on the active roster, starting the day at 52 instead of the maximum 53. The Dolphins, though, will need a spot when cornerback Byron Jones returns off the physically-unable-to-perform list and offensive lineman Austin Jackson comes back from injured reserve.