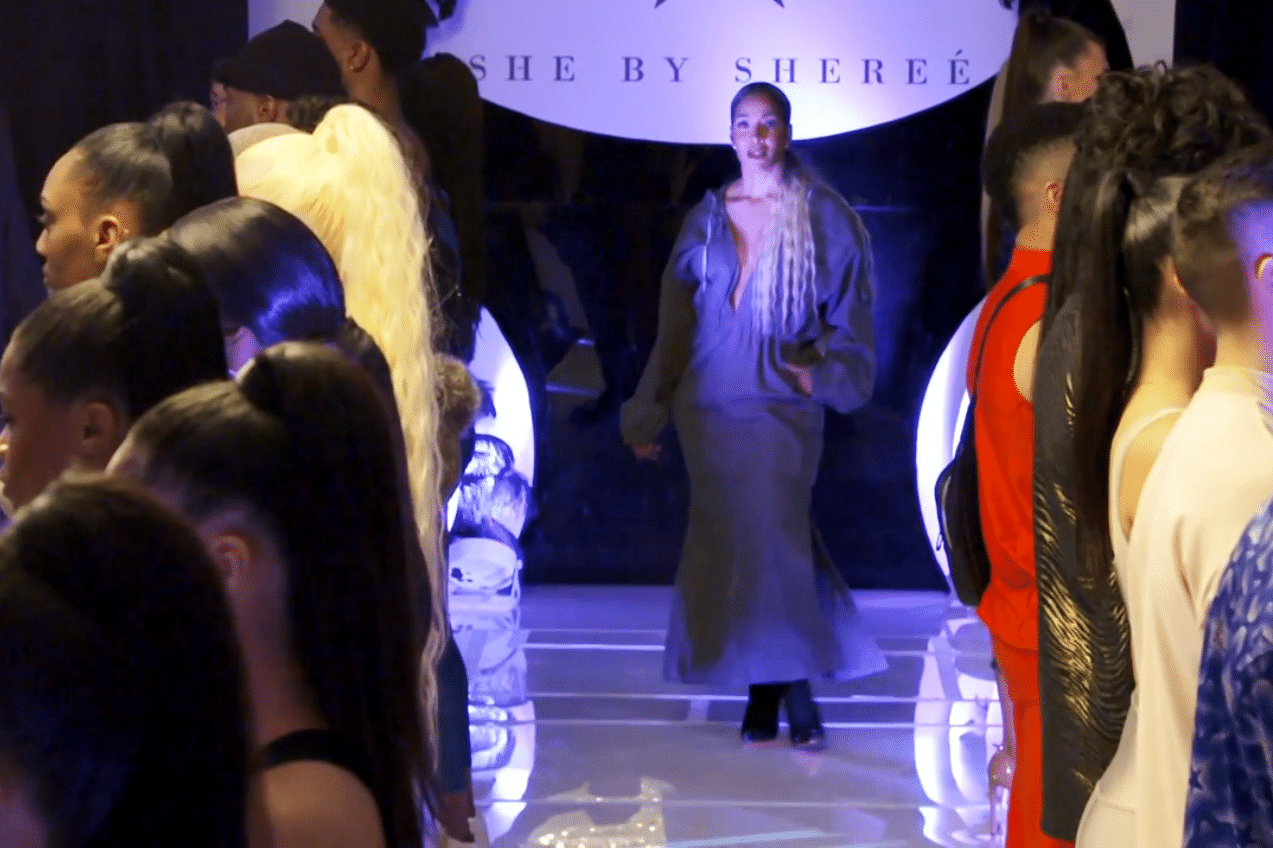 Will there be a fashion show with no fashions on the Real Housewives of Atlanta? Grab a cocktail, take a seat, and see if Sheree can finally pull this off!

Kenya gets some good news that she got her product bottles, so she can complete her order. She was having logistical problems and had to go overseas to make this happen. Kenya will be twirling through 5,000 CVS stores, and Sheree should have been going to her for mentoring since she can get things done.

Marlo is bringing Michael and William over to Sanya and Ross’ house for some guy time. She is wearing a tiger in her ITM that looks like it might be climbing over her shoulder. Marlo must show us that she can cook dinner since Sanya is not capable. She shares that her mom cannot even stay at her home while she is in town. Marlo tells Sanya that she went knocking on doors the last time telling the neighbors her daughter was a tramp. YIKES, but there is some truth there…

Ross is going to show Michael and William how to change a tire and oil using Sanya’s car. He missed having this experience, so it is truly kind of him to do that. The boys seem happy to have that time with him, and I like seeing those boys’ smiles.

Sanya shares that she has finally decided to remove her IUD, and Marlo cannot get the acronym right. She claims that she and Ross are on the same page about expanding their family. Sanya thinks that Ross has finally heard her perspective and things will be different this time. Only time will tell on that one, and who knows who will be cast next season after this lackluster season? There are rumors that Porsha is being asked to come back.

Sheree still does not have all the samples for her show, and production shows a counter that disputes what she is saying. She is having PTSD after being embarrassed many years ago, and you would think she would have been better prepared. Sheree had 14 years to get it right, but she has been too busy with her prison pen pals to create her designs. At this point, Sheree should just pull a Sonja Morgan and pull the tags off someone else’s designs and slap them on her joggers.

Marlo is meeting up with her mom, Emma, since she just flew her in from Arkansas. Emma has lost the teeth that Marlo bought her, and I could not help but feel sorry for her having to film like that. Marlo credits her mom with her style, and I have no words for that one. Emma wants to move back to Atlanta, but Marlo wants to be sure that she is sober before she will let her back into her life. She thinks having this conversation in public is the best way to do it. Emma said the most hurtful thing that Marlo did was when she kicked her party posse out of the house. Marlo said she had no choice since there were drug deals going on and the boys were being neglected. Emma then tells Marlo she has her love and support, and you can almost see Marlo as a young girl who desperately needed to hear that.

Kenya, who obviously planned much better for her collaboration with CVS, has her products in lots of stores. Kandi and Sanya come to celebrate Kenya’s success. Drew even comes limping in with her cast — while wearing a pink bathrobe. The pain meds must be making her forgetful? They all discuss how Sheree is struggling, and Drew reminds everyone that Sheree has a pattern of not following through — with payment.

Kandi and Mama Joyce discuss her estate planning. Mama Joyce wants Riley to benefit the most from the estate even though she is the oldest. She believes since Riley is the only one who does not have a father who will take care of her, she deserves it the most. Mama Joyce does not want Todd being set up with a lavish lifestyle, and she is willing to ignore the fact they share two young children? I am sorry, but it is hateful to say that just because you are not a fan of Todd. Kandi wants Don Juan to be the head of the trust, but Mama Joyce wants to be that person. Kandi is fearful she will take her out if she does not have Don Juan as a buffer.

The venue for the show does look very professional and well done. Sheree claims her show is the hottest ticket in town and she has finally gotten the models that she needed, but she is still missing 19 pieces. She needs the show to last 15 minutes for it to be considered a fashion show. Rawan found someone who was able to provide the models. She is willing to fly and pick up the samples herself. Apollo strolls in, and you can tell he is really enjoying being back on camera, and production even gave him some ITM scenes.

Tyrone, aka Lierone, walks in with so much swagger, and he thinks it is a clever idea to make his debut at Sheree’s fashion show location. He is using her for whatever stories he can sell about her and get screentime. Sheree’s daughter does not even know who he is. Tyrone acts like he could not meet Sheree in Philly because she was taping. He refuses to apologize and keeps working the room chatting with her daughter and Apollo. Sheree keeps wasting time with this fool begging him for an apology. She wants him to go kick rocks and not to come the next day.

Emma comes to Marlo’s business Le’Archive and is checking out the merchandise. Marlo with her furry boots called Kandi and asked her to come and meet Emma.  She loses it when Emma mentions bringing her boyfriend around. Kandi arrives just in time to break up this family spat. Emma finally tells Marlo she will not bring her boyfriend around. Kandi asks Emma about her past and she is thankful that she had Mama Joyce. Side Note: I give Kandi lots of credit to put her differences aside with Marlo and come and meet Emma.

Fashion show time—Sheree shares that she has a total of twenty-four looks and all the models have arrived. She is totally stressed out and has not even done her own hair and makeup. Barking Fatum arrives and you know that is going to piss off Drew. Marlo who looks like she belongs in the Cats musical shares with the other ladies that Tyrone is outside bearing flowers in his black and white suit. Holy sh*t Tyrone has some balls —he has a photographer taking photos for him. Sheree recognizes that he bought the flowers from Publix and production shadily shows how cheap they  were.

Dwight arrives to see if he can change his opinion on the line. Tyrone tells the ladies that he can finally make an appearance since he no longer has a monitor on. Peter Thomas even flies into the scene high as a kite and the room is packed with other Bravolebrities. The fashion show is now already 30 minutes late then 60 minutes late and the ladies are nervous that it will not happen. WOW it is now 2 hours late and Dwight is sick of waiting and so are we!

The fashion show finally dramatically starts, and it looks well done. The ladies are liking how the men are filling out their joggers. Apollo comes out strutting his stuff and he gets a lot of applause.  Tyrone is still trying to talk to Sheree, and she is on a high and won’t play with prison beys anymore. Rawan was able to help Sheree finally pull it off!

We now get our closing notes:

Sanya has removed her IUD and trying for baby #2. She has not uninvited anyone from anything lately either.

Kandi and Todd’s trust remains unfinalized and she is producing another Broadway play teaming up with Samuel L Jackson. Kandi wants to be able to add a T and complete her EGOT.

Drew continues to work on her fitness and her marriage. Ralph’s new book is due any day now —Drew still has not read it.

Marlo will soon break ground on her new home. She is still on her journey to self-improvement and her edges continue to flourish.

Kenya and Brooklyn spent their summer twirling around Europe unfortunately her Mary Kay wig could not travel internationally.

Sheree no longer calls Tyrone because she has a new Boo. She By Sheree is finally available for purchase!

I want to thank all of you Blurbers who took the ride with me this season even though it was lackluster. Maybe the 3-part Reunion will be better? Take care and be well and R.I.P. to one of our devoted Blurbers LOLicious…

TELL US — THOUGHTS ON THIS RHOA EPISODE?

Do You Rent Or Own Your Job?

Could Barnes & Noble’s return to this Bay Area city signal a resurgence of bookstores? – The Mercury News