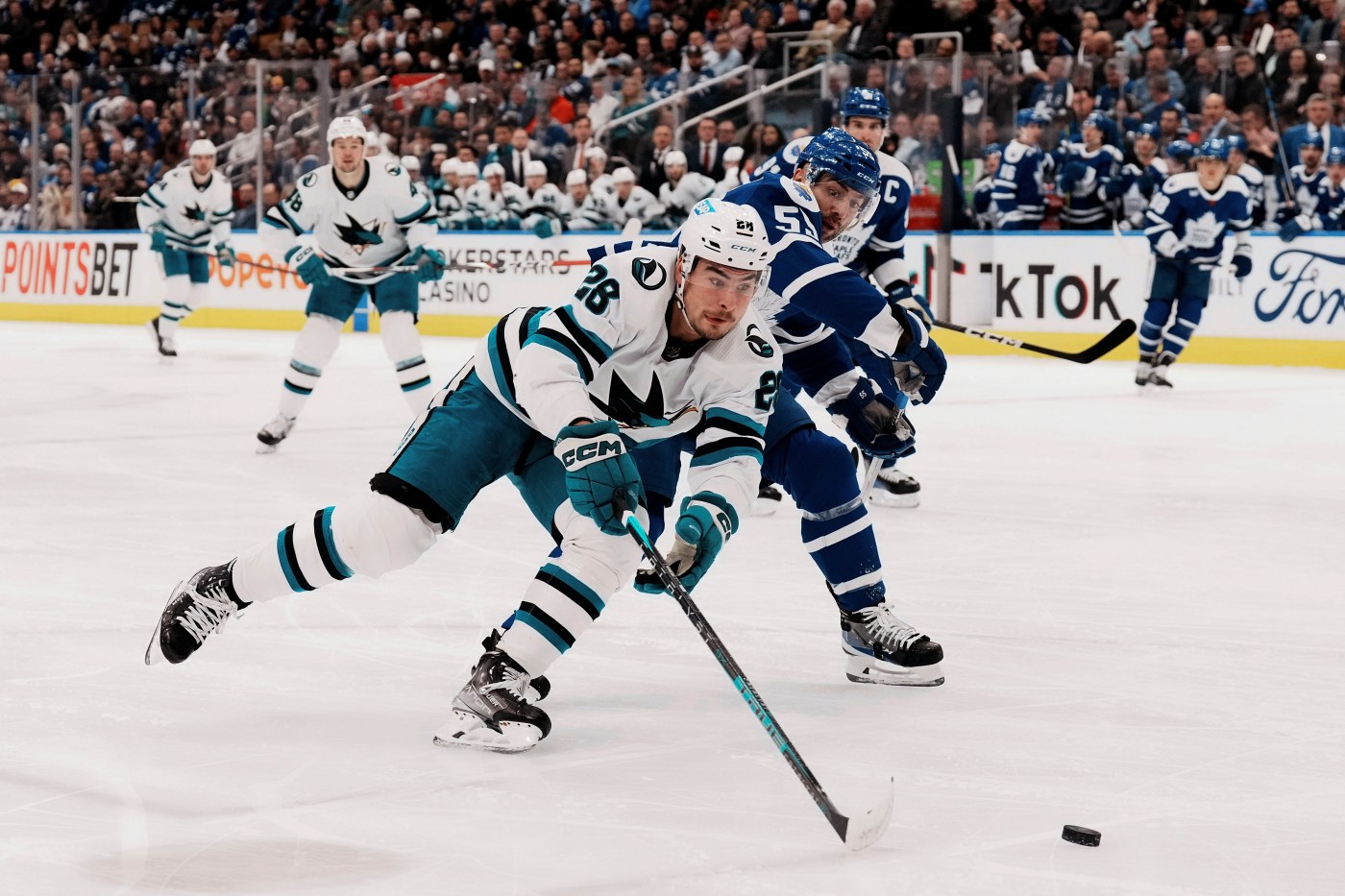 The Sharks allowed a go-ahead goal to Pierre Engvall with 2:27 left in the third period in a 3-1 loss to the Toronto Maple Leafs on Wednesday at Scotiabank Arena.

Tomas Hertl had the puck in the neutral zone but had a backhand pass intercepted by the Maple Leafs. Alex Kerfoot later put a shot on goal that was saved by Aaron Dell, but the rebound came straight to Engvall, who scored his third of the season to give the Leafs a 2-1 lead.

Matt Nieto scored the only goal for the Sharks, who lost for the fourth time in five games.

The Maple Leafs opened the scoring at the 4:19 mark of the second period, as Auston Matthews established position in front of the Sharks’ net and redirected a pass from Mac Hollowell past Aaron Dell.

The Sharks got that goal back at the 7:26 mark of the second. After Logan Couture took a pass from Nick Cicek and skated behind the Maple Leafs and passed in front to Nieto, who snapped a shot past Ilya Samsonov for his sixth goal of the season, matching his total from 70 games last season.

The Sharks killed both second-period penalties they took Wednesday against the Leafs, improving upon what was already the best penalty kill in the NHL.

Going into Wednesday’s game, the Sharks had killed 91.2 percent (62 of 68) of the penalties they had taken this season. Starting with their 5-4 win over the Dallas Stars, the Sharks, before the game in Toronto, has killed 25 of 27 penalties (92.6 percent), which has helped them to a 5-4-1 record in that time.

Dell was making his first NHL start since Jan. 25, 2022, when he faced 47 shots as a member of thre Buffalo Sabres in a 5-2 loss to the Ottawa Senators.

Dell’s last start for the Sharks before Wednesday came when the Sharks played in Chicago against the Blackhawks on March 11, 2020, a day before the NHL and other sports shut down due to the COVID-19 pandemic.

Dell made 10 saves in the first period played at a breakneck pace, which seemingly favored a Maple Leafs team that entered the game with a 10-1-3 record this November. Mitchell Marner had played a huge role in Toronto’s success, with six goals and 17 assists in a 17-game point streak.

The Sharks finished the month with a 5-6-4 record as they came into Wednesday in seventh place in the Pacific Division.