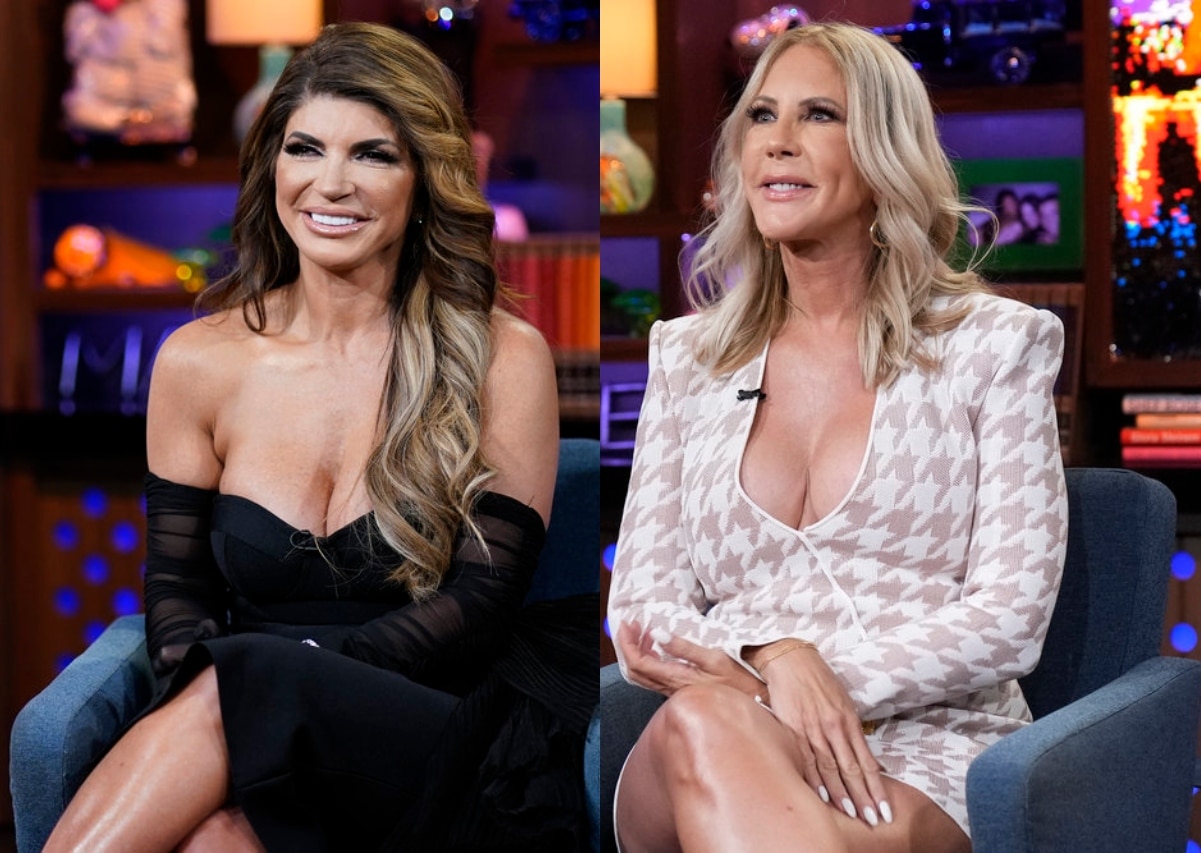 Teresa Giudice is responding to Vicki Gunvalson‘s suggestion that she’s the most “overrated” cast member of the Real Housewives.

“My response [to Vicki’s comment] is we’re all Housewives,” Teresa told PEOPLE on Saturday. “And we should all be lifting each other up and not saying anything negative about each other. If someone’s trying to put a black cloud over you, you need to chew it away and make the sun come out…I’m not about that.”

Vicki had shared the diss as she attended the “Right the Relationship” panel on Friday.

“I’m going to say Teresa [Giudice],” Vicki said. “It’s not that I don’t like Teresa, I just think, you do a bad thing and you go to jail and you still carry on a TV show? I just can’t believe it… I just think she’s overrated.”

In addition to reacting to Vicki’s shade, Teresa teased the upcoming season of RHONJ.

“It was a sad season for me,” she revealed. “It’s heartbreaking but it ends with a happy ending… This season a lot of things open my eyes, like really wide open. So I wanna focus on my children and my husband, and that’s what’s important to me.”

During another interview, Teresa spoke of walking down the aisle without Joe.

“My wedding was really devastating to me that he wasn’t there and right now, I’m focusing on my children and my husband,” she explained to E! News. “I need time to heal. I’m very heartbroken. He’s my only family.”

Although Teresa has suggested in recent weeks that a reconciliation between her and Joe is out of the question, Joe told E! News in his own interview that “there’s always room.”

“I love my sister. I really do,” he confirmed. “I feel like we went back to when we first got on the show. And we’re older now, and it shouldn’t be this way, and it saddens me. It really does. I don’t want this.”

Joe’s wife, Melissa Gorga, also spoke to the outlet, saying that while there are always highs and lows in their relationship, they’re definitely at “one of [their] lows right now.

“I think we need time. I feel like Joe and I have had enough. We are exhausted and sometimes family needs space and right now, we need space,” she admitted.

Then, after confirming to Access Hollywood, via All About the Real Housewives on Instagram, that she hadn’t spoken to Teresa since arriving in New York City for BravoCon, Melissa said she didn’t think their current feud was so bad that they needed to be separated.

As for Joe skipping Teresa’s wedding, Melissa said the circumstances were “unfortunate” before suggesting her sister-in-law, who was accused of pushing a cheating rumor amid season 13, attempted to break down her marriage.

“I think there’s always a regret there. It’s not so much regret as it is like a sadness and it’s unfortunate and you don’t get those moments but it’s really hard waiting to explain why we didn’t go for you to see the reasons why and understand why,” Melissa explained. “But I also know there’s a lot of people out there that are very proud of us for finally standing our ground because there’s been a lot of ups and downs throughout the years.”

“And when someone’s — when people — are constantly trying to break your marriage down, why are we going to support someone else’s?” she added.

The Real Housewives of New Jersey season 13 is expected to premiere on Bravo sometime in early 2023.

All children are born to learn – but so many never do