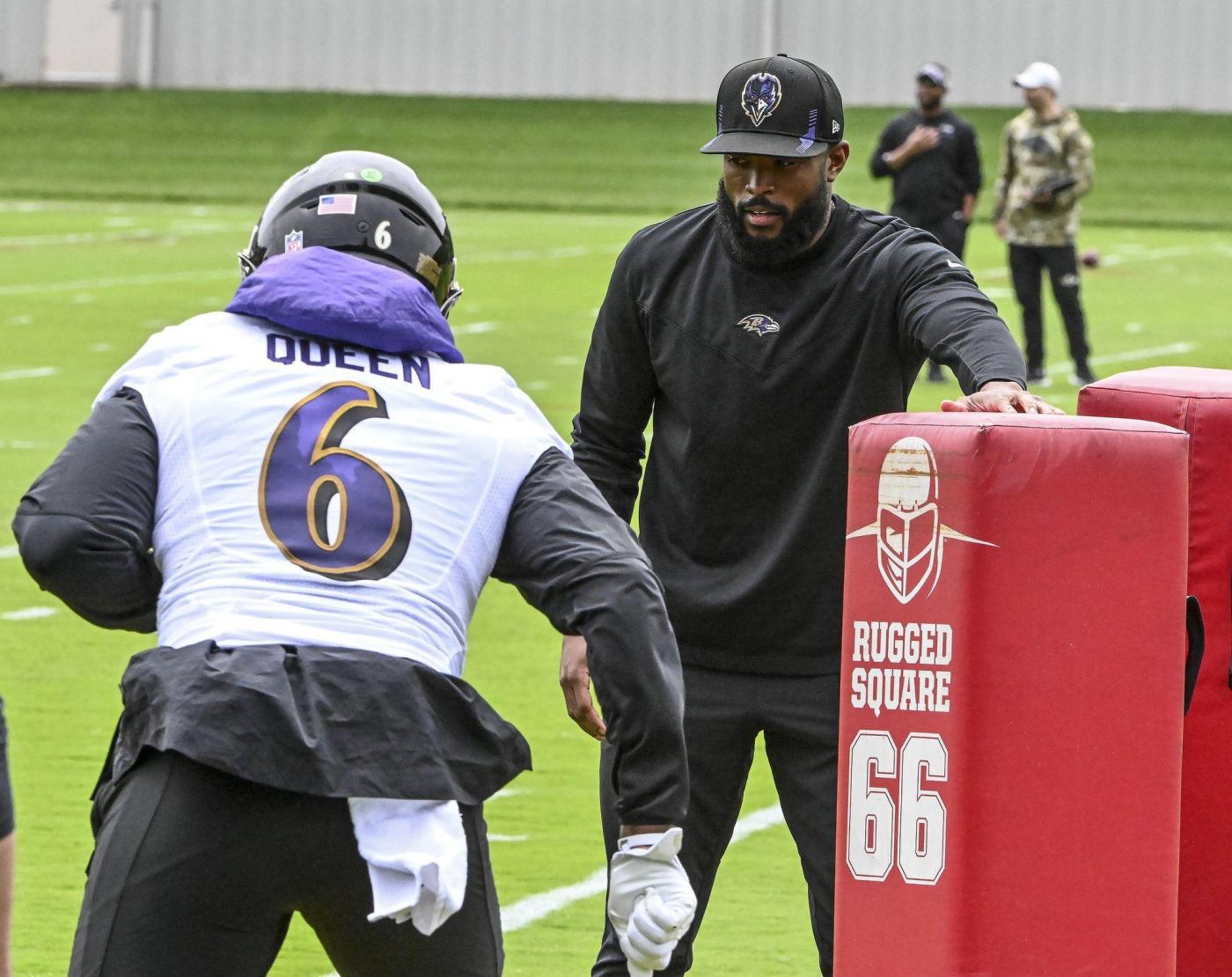 The idea took plenty of getting used to.

Zach Orr was 25 years old — strong, quick, less than a year removed from dragging 133 NFL ball carriers to the ground over a 15-game season. All that, and he could no longer call himself a player because of a congenital neck/spine condition that increased his risk of paralysis. The Ravens, and 31 other NFL teams, were unwilling to chance putting him in uniform for the 2017 season.

He was no longer a linebacker. Instead, he was a coach.

Five years later, this no longer sounds strange to Orr as it rolls off his tongue. Yes, he’s still young enough to play. He’s reminded of this every day when he sees Josh Bynes, his former Ravens teammate who at age 32 is two years Orr’s senior.

“Not anymore!” he said Wednesday, when asked if he feels the urge to jump in on certain plays. “I’ll tell you, the first probably year or two, I did. But now, I’m like, ‘This is crazy.’ I couldn’t compete with these guys right now, so I have no itch. It’s funny … I’ve really fully transitioned into straight coaching. I know I played, but I kind of forget that I played now in that sense.”

Bynes is a contemporary, but some younger Ravens were in middle school when Orr played, a reality that boggles his mind. “I’m not even that old,” he said, grinning as he contemplated the warp speed of the NFL career treadmill.

Orr has grown up with the Ravens, the only team he played for in three NFL seasons and the one for which he worked over his first four years as an apprentice coach. “This is home,” he said, joking that he was glad he did not mess up the interview process when he had his chance to return from Jacksonville.

Ravens coach John Harbaugh has watched Orr’s entire evolution, from his first day as an undrafted free agent to now.

“He’s always got that fire,” Harbaugh said. “You could always count on Zach. If you asked him his opinion, he’s telling it to you, and he would tell it to you for a while. He’s happy to do that, and you appreciate that, because he’s got conviction.”

How did that fire transition from the field to the meeting rooms where Orr must now hold the attention of young athletes?

“I see confidence all the time, and now I see even growing competence,” Harbaugh said. “He really has learned the game. He [was] a very smart player, who’s taken the time to study and learn the game, and he’s become a good teacher. He’s a really good teacher. And so, he breaks things down well and presents it to the guys very well.”

Orr said teaching was not second nature for him, though he grew up in an NFL family, watching his dad, Terry, play tight end in Washington.

“It’s something that I had to work on,” he said. “As a player, I understood the game pretty well, but coaching is a whole different deal. It’s not what you know, it’s what can you teach the players and what they can retain and what they know.”

“I just sat and watched and observed and learned,” Orr said. “I took little things from everybody and put my own little spin on it.”

He has earned strong reviews from the players he’s working with closely, Bynes and 2020 first-round draft pick Patrick Queen.

“He brings energy every day in the meeting room; he’s the main one hollering and stuff, trying to get our attention,” Queen said. “So, just hats off to him for the way he’s coaching. … Learning from a guy that did it at the highest level that it can be done, I’m extremely thankful.”

Queen’s performance could be a bellwether for a defense that is trying to recover from a disappointing 2021 season. Can he build on the flashes of big-play talent he showed after the Ravens paired him with the steady Bynes?

When Orr reviewed every snap from Queen’s 2021 tape, he saw improvement, especially on run defense. But he believes there is plenty more to unlock.

“I mean, the sky is the limit for him,” he said. “That’s the thing — God touched ‘PQ’ [with] natural ability, and he works hard at it. Obviously, you see he’s out here every single day, and we just continue to try to work and get him better and better, because I honestly believe that [if] he continues to get better, continues to grow, continues to work on the little details, he can be one of the best linebackers in the National Football League.”

Then there’s Bynes, the veteran who has found his way back to Baltimore twice to offer stability in the middle of the defense. He might teasingly refer to Orr as “Coach Zach” and remind him of the days when he was a rookie, fetching candy for the older linebackers on the team. But he’ll also be a valuable co-pilot as Orr grows into his new role.

“I mean, having Josh in the room is obviously wonderful, because he’s a football savant,” Orr said. “There’s a reason why he’s still playing and he’s going into Year 12. He can dissect offenses, defenses, and he can dissect the game at a high level, really fast, and that’s very valuable. So, obviously, I use Josh as the guy … I might not see something, or I might see something a certain way, and he might see something a certain way, [and] we can definitely talk and collaborate about it, see how he sees it and figure out what’s the best way to go about things.”

Tyreek Hill debuts podcast, says Chiefs didn’t get him the ball enough in 2021, Mahomes isn’t as accurate as Tua – The Mercury News