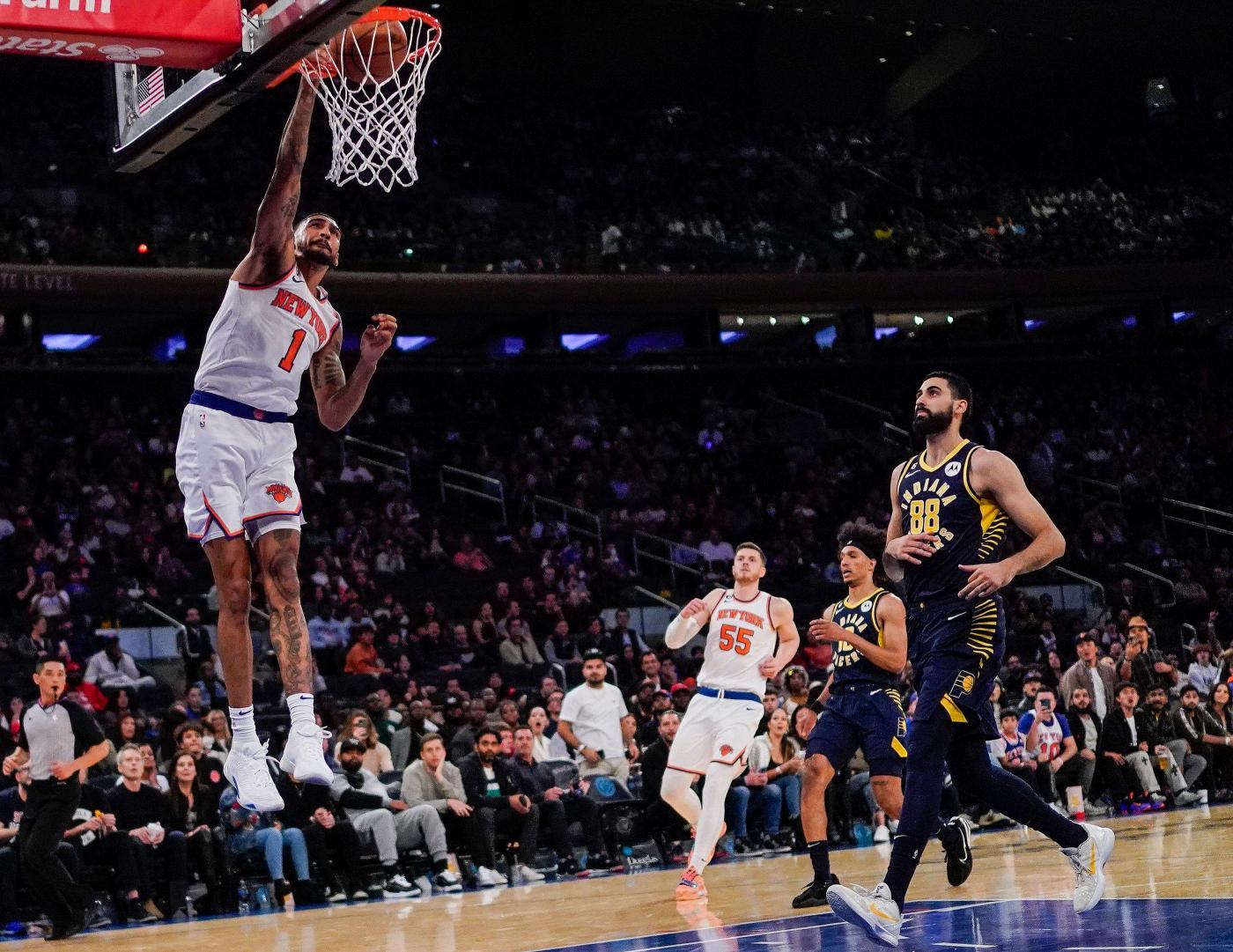 INDIANAPOLIS — There are different schools of thought, often divided by generations. Showmanship or showboating? Insulting or fun? Exhilarating or reckless?

There’s the Mark Bavaro way, which is to cross the goal line and hand the ball to the referee. Then there’s Deion Sanders, who high-stepped to a touchdown and finished with a ‘Primetime Dance.’

It’s different in basketball but some of this applies to Obi Toppin. If he’s on a breakaway – which happens quite often in his limited minutes, especially against Wednesday’s opponent, the Pacers – Toppin tends to make a show of it.

Kawhi Leonard or Tim Duncan secures the two points with a one-handed uneventful dunk. Toppin puts the ball through his legs in midair.

“I just want the two points. But the thing is, he’s a great finisher. I want him to be himself,” Thibodeau said. “He plays with emotion. The value of a dunk is pretty high when you look at the (shot efficiency). So, I think the more he dunks, the better. I’m not for all the crazy stuff, but he’s gifted, and I don’t want to take his gift away from him.”

Toppin first went through his legs for a dunk last season in Indiana, which was before he won his Slam Dunk title at All-Star weekend. He’s converted all his between-the-legs dunks during games, although last week’s attempt turned dicey because Pacers guard TJ McConnell snuck behind and nearly swatted the ball away.

The crowd enjoys the spectacle and so do Toppin’s teammates, which gives credence to the idea that such dunks boost adrenaline and the homecourt advantage. Good opponents might be motivated for revenge. Bad teams, like the Pacers, are deflated.

“It’s two points that goes on the scoreboard but it’s a lot more than that,” Toppin said. “It’s a lot more energy that’s built around that.”

Still, Toppin understands that there must be more to his game than dunking. It’s been his calling card in the NBA, but playing time and longevity are built on other skills.

“I’m not going to dunk for the rest of my life. Vince Carter can still dunk but I don’t think he’s doing the same things he was doing 10 or 15 years ago,” Toppin said. “You just got to adjust. Once you get older, being able to shoot, being able to do little things that will help your team win. It’s not always going to be dunks.”

In the meantime, Toppin, who was often benched as a rookie after defensive mistakes, has learned not to look at Thibodeau for dunk approval.

“I’ve trained myself not to look at Thibs anymore. Because every time I look at Thibs, I get in my head,” Toppin said. “So I just get back on defense and I’m happy it went in.”

The Knicks eclipsed the L.A. Lakers as the best-selling team on StubHub this season, the ticket company revealed this week.

It’s the first time in five years the Lakers weren’t on top of the StubHub list.

The most ‘in-demand’ game this season, according to StubHub, is Golden State at the Knicks on Dec. 20 for Steph Curry’s annual trip to MSG. Despite the Knicks losing more games than any other NBA franchise since 2000, they’re always among the league’s most valuable because of the location above Penn Station.

“The Penn Station project is a crucial one. I think that area is ripe for housing, is ripe for real investment,” Mayor Adams said last month. “And if that fits into Madison Square Garden moving into another location, maybe we’ll help the Knicks win. So we should be willing to speak with Mr. Dolan and see how it fits into the overall scheme of that area.”