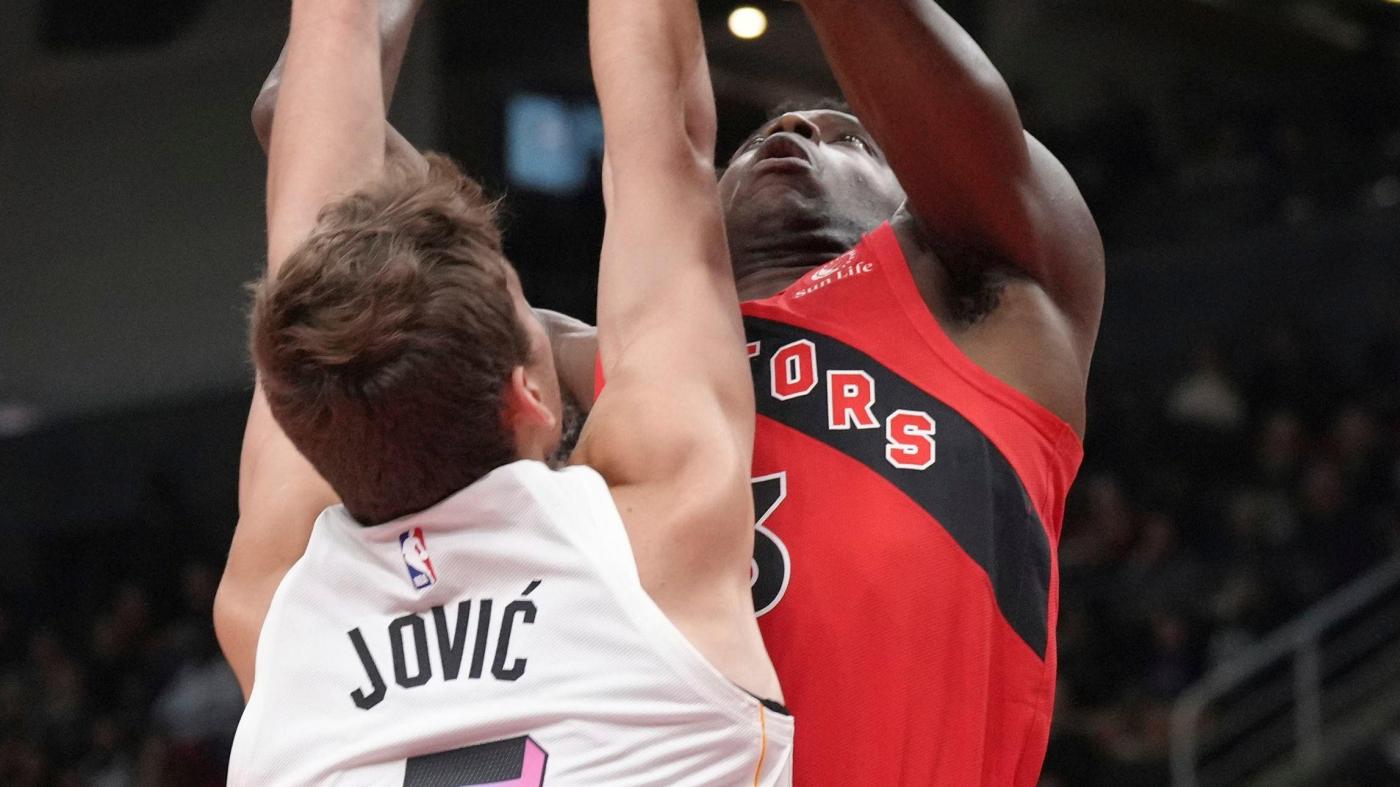 Observations and other notes of interest from Wednesday night’s 112-104 loss to the Toronto Raptors:

– It’s not as sexy as, say, making something out of an undrafted prospect.

– Which the Heat have done plenty of in recent years.

– But don’t sell short making something out of a No. 27 pick.

– Nikola Jovic certainly had himself a night in his first start.

– Or at least a first half.

– And this is how it tends to go with such prospects.

– For all those on the outside who insist on playing time, it tends to happen organically.

– With the opportunity coming with Bam Adebayo sidelined.

– So with Dewayne Dedmon dealing with an ongoing foot issue and limited in his minutes, Jovic’s number came up.

– So he put numbers up early.

– No, this still doesn’t mean he has shown he can play alongside another big man.

– And Caleb Martin hasn’t done anything to lose his starting job.

– And it doesn’t mean he is a true big man, at least year, as the rebounding numbers showed.

– But you seize moments.

– Just like Omer Yurtseven did last season when Adebayo was out.

– And you create confidence for the next opportunity.

– If Adebayo is back Friday night in Washington, it certainly is possible Jovic doesn’t play.

– But now there is confidence to pull him out of rookie mothballs when needed.

– And that, alone, made Wednesday night inspiring.

– With Adebayo (knee) and Tyler Herro (ankle) out, Adebayo was replaced in the starting lineup by 19-year-old Jovic, and Herro by Max Strus.

– Rounding out the Heat starting lineup were Jimmy Butler, Kyle Lowry and Martin.

– In addition to Adebayo and Herro, the Heat were without Victor Oladipo, Yurtseven and Udonis Haslem.

– With the Heat shorthanded, two-way players Jamal Cain and Orlando Robinson both were active.

– It was Orlando Robinson’s first game on the active roster, signed over the weekend as a roster replacement for Dru Smith amid the Heat’s shortage in the power rotation.

– It was Cain’s sixth game active, limited to 50 such listings over the 82-game season.

– The Raptors were without Pascal Siakam, Gary Trent Jr., Otto Porter and Precious Achiuwa, among others.

– Cain was part of the Heat’s first substitution, along with Gabe Vincent.

– Dedmon then followed, for Jovic.

– With Duncan Robinson then making it nine deep for the Heat.

– Heat coach Erik Spoelstra spoke at the morning shootaround about the value of his team’s recent close games.

– “It’s the quickest way for your team to be able to grow and get connected and build some trust, is when you have these really close games with a lot of context to them, where there could be one or two things that lead to a win or a loss,” he said. “That will get you to pay attention really quickly, it will get you to cover those situations the next day and you go through it together in the fire.”

– He added, “I think your team gets better from those experiences. We’re starting to get a little bit closer to a consistent identity. We’re not there yet. But we’re working at it and we’re getting closer.”

– “I never thought I’d be there but I’m here now,” he said. “It’s a great accomplishment. But like I always say, I’ll look at my accomplishments when I’m done and retired. It’s cool to get some acknowledgement but, for now, let’s go and try to get some more wins.”

– Asked whether he still keeps an eye on his former Raptors teammates, Lowry cited VanVleet, Anunoby and Siakam.

– Of Lowry’s return, Spoelstra said, “These are special moments when players build up such a great career in one place.”

– “There’s some things you can’t do completely that you would only know with inside information, probably,” he said. “So it takes some stuff out.”

– Wednesdays stand as the busiest day of the week for the Heat, playing 17 times on the day this season. There are only eight Wednesdays this season the Heat will not play on (even when including the February 22 All-Star break).

US DUI Laws and Arrests are Not Well Understood by All, Says Martin Birdsall Esq.