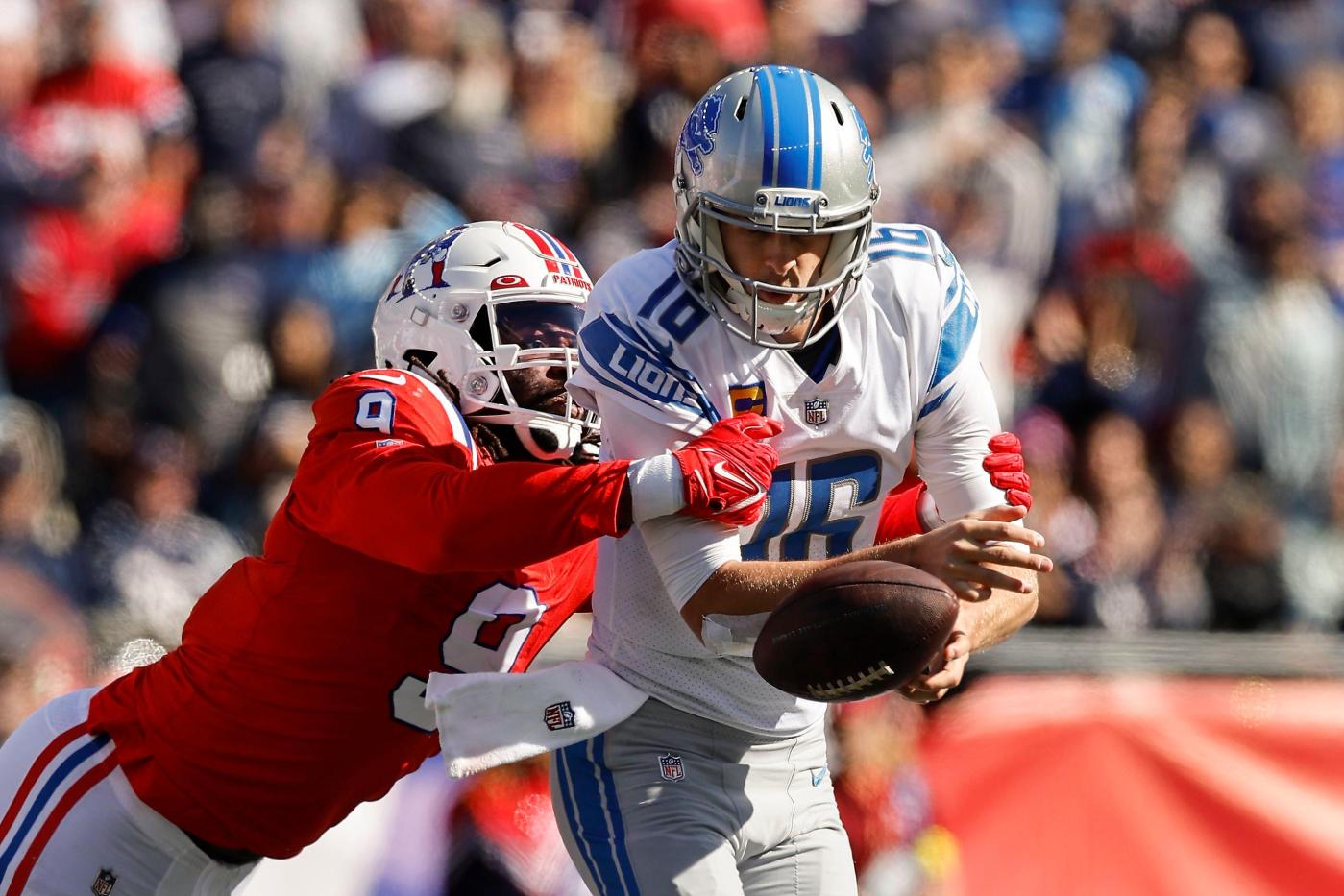 Matt Eberflus dropped enough hints during the Chicago Bears’ review of the first six games that it wouldn’t be a surprise if they were to make a change on the offensive line against the New England Patriots on Monday night at Gillette Stadium.

The most likely scenario is Michael Schofield taking over at left guard with Lucas Patrick sliding over to center and Sam Mustipher heading to the sideline.

If so, it will be the fourth lineup the Bears have used on the line in seven games with the team needing to plug a hole while Cody Whitehair is on injured reserve with a sprained MCL in his right knee. Whitehair is sidelined for at least two more games, and the soonest he could return is Nov. 6 against the Miami Dolphins at Soldier Field.

Despite the ongoing shuffling, the Bears have run the ball extremely well, ranking second in yards per game (170.8) and seventh in yards per carry (5.2) — numbers boosted by Justin Fields, who trails only Jalen Hurst of the Philadelphia Eagles in rushing yards by quarterbacks (293 to 282).

Conversely, the passing game has been a wreck, and there’s ample blame to go around. The Bears are last in passing yards and completion percentage and rank 31st in passer rating. Fields, who is averaging 10.5 completions per game, has been sacked on 20% of his pass attempts, more than double 27 teams and a significantly higher rate than the other four clubs. He’s tied with the Washington Commanders’ Carson Wentz for the most sacks in the NFL with 23, and Wentz has attempted more than twice as many passes — 232 to 115.

“We know we’ve got to get better and we’re working to do that,” offensive line coach Chris Morgan said. “It always starts with us, and we know that. We’re doing everything in our power to keep Justin clear. We know we have to improve.”

Pass protection has been a significant problem, especially in two of the last three games against the Commanders and New York Giants, and schematically the Bears haven’t found a way to help rookie fifth-round pick Braxton Jones hold up at left tackle. They’ve been beaten across the line, and it’s probably unrealistic to believe any reconfiguration would be a cure for all that ails the pass protection. If the coaching staff thought there was, a move would have been made sooner.

The difference between run blocking and pass blocking is striking.

“Pass blocking is one of the hardest tasks in this league,” offensive coordinator Luke Getsy said. “Defensive lines in this league … they’re amazing players. I would imagine most evaluators don’t even watch run blocking as much because pass pro is so hard. That’s why you have to run the ball. That’s why you have to use play (action) pass to help alleviate some of that. And then when you get into the obvious passing downs, we have to find different ways to kind of keep them accountable and not just let them run off the ball as fast as (they) can.”

Patrick has struggled playing both guard positions and on Thursday was critical of his performance. Moving him to center would put him where the team originally slotted him when he signed a two-year, $8 million contract in free agency. Patrick couldn’t play there to start the season after suffering a broken thumb on his right snapping hand that required surgery at the outset of training camp.

“If I knew (why I was struggling), I probably would be playing a lot better,” Patrick said. “Just going to keep working and keep checking my process and working things from a ground-up approach and try to build things the right way.”

Patrick rotated with Teven Jenkins at right guard at the start of the season before he was tabbed to replace Whitehair on the left side.

“It’s a different approach (playing different positions), but there’s no excuses,” he said. “If I’m in there playing, the guy I am going against doesn’t care whether I’ve had 1,000 snaps, one snap, playing left, right, whatever. I have to perform. I’m going to work at performing at a higher level.”

The Bears probably would like to look at Alex Leatherwood at some point, but he has had only 10 practices since being claimed off waivers from the Las Vegas Raiders on Aug. 31 and then having a four-week stint on the reserve/non-football illness list with mononucleosis. Leatherwood hasn’t been activated to the 53-man roster, and the team has another week and a half to do so. He dropped weight while sidelined so he’s getting back in shape.

The Bears said they had strong grades on Leatherwood when they claimed him and his contract that included $5.9 million in remaining guarantees. Even if the Raiders overdrafted him at No. 17 in 2021, he still could have a bright future.

“He was a very decorated player (at Alabama),” Morgan said. “Big, strong, smart guy and a very productive college player. There was a ton of good stuff on tape to like.”

Schofield played briefly last week when Patrick and Jenkins were sidelined. The Bears signed Schofield just before training camp but cut him to help reach the 53-man roster. When Leatherwood was sidelined, Schofield was re-signed during Week 2. Schofield had a bumpy preseason but has 81 career starts.

“Mike has played a lot of ball,” Morgan said. “He’s an athletic guy, smart guy and he’s got a lot of starts. He brings a lot to the table for our group.”

With 11 days between games, Eberflus laid down enough bread crumbs for a trail leading to a new starting lineup. Leatherwood needs more time to get back into football shape, and the Bears have talked about the possibility of Patrick returning to center since before his thumb healed. It stands to reason the team will keep Jenkins at right guard.

Mustipher has made 29 consecutive starts at center and improved since last season, but he could be the odd man out.

None of what has happened up front is a surprise. The Bears don’t have a lot invested in the line between draft capital and salaries. Morgan repeatedly talks about the process and maintaining focus on improvement each day.

Perhaps the line will be in a better place, or perhaps it will resemble what it did during the first six weeks. Just know Fields, the receivers and the running backs are tied to the production of the passing game — and the Bears have been failing in every area.

Information for this report was obtained from NFL scouts.

Judon, 6-foot-3, 261 pounds, is in his second season with the Patriots after signing a four-year, $54.5 million contract in free agency following five seasons with the Baltimore Ravens. Judon had a career-high 12 ½ sacks last season and is off to a fast start with six this year, tied for second in the league. He also has five tackles for a loss and 12 quarterback hits.

The Ravens drafted Judon in the fifth round in 2016 out of LSU, and he quickly filled the role that Pernell McPhee had before he signed with the Bears in free agency.

“I have never seen Judon as a top-tier edge rusher,” the scout said. “He’s not in the category of Myles Garrett or the Bosas. He needs scheme to help him. That doesn’t mean he can’t win one-on-ones. He can. But he’s not a consistent top-tier producer.

“He fits into the scheme and has the traits within the scheme to create pass-rush disruption and you are seeing that now because (the Patriots) are so heavily schemed on the defensive front. He can rush from a two-point stance. He can play in a three-point. You will see him move around the front, and they use so much slanting and angling and looping, it creates even more pass-rush opportunities for him.

“In terms of winning one-on-ones, he has very good hand usage. He’s very physical. He’s got pretty good short-area burst, enough when he’s going against a young, inexperienced tackle like you see in Chicago. I would be really surprised if (Bill) Belichick doesn’t scheme a bunch of one-on-ones for him where they are going to occupy the guard in protection and make the tackle block Judon. That will give the Patriots favorable opportunities, and Justin Fields better be ready to get the ball out.”