Lisa Rinna took to her Instagram page on Friday to reveal that she’ll be seen suffering a breakdown on next Wednesday’s episode of The Real Housewives of Beverly Hills.

Before sharing a series of messages from supporters, in which empathy was requested, Lisa admitted that while dealing with immense grief amid season 12 after losing her mother, Lois Rinna, following a stroke at the end of last year, she broke down with cameras rolling.

“Next week I have an absolute and utter breakdown on camera,” Lisa shared with her fans and followers on August 5. “I am apprehensive because I am very vulnerable. Grief is so hard.” 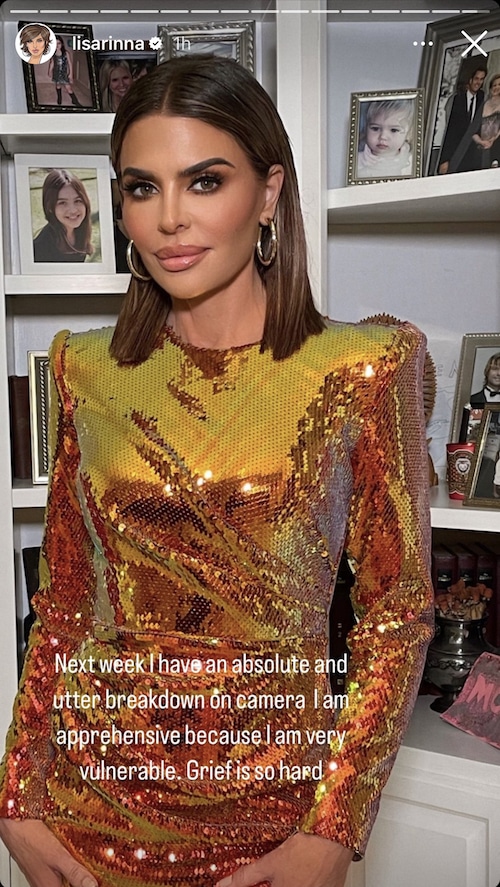 Lisa then reshared a message from a fan who noted that “grief is tough.”

“You don’t know it til you go through it. It makes you crazy. Impulsive. Irrational. And that’s all completely normal and valid,” the message from podcaster Zack Peter stated. “Lois was such an important part of Rinna’s life. The loss of a mother is unearthing. Empathy goes a long way.” 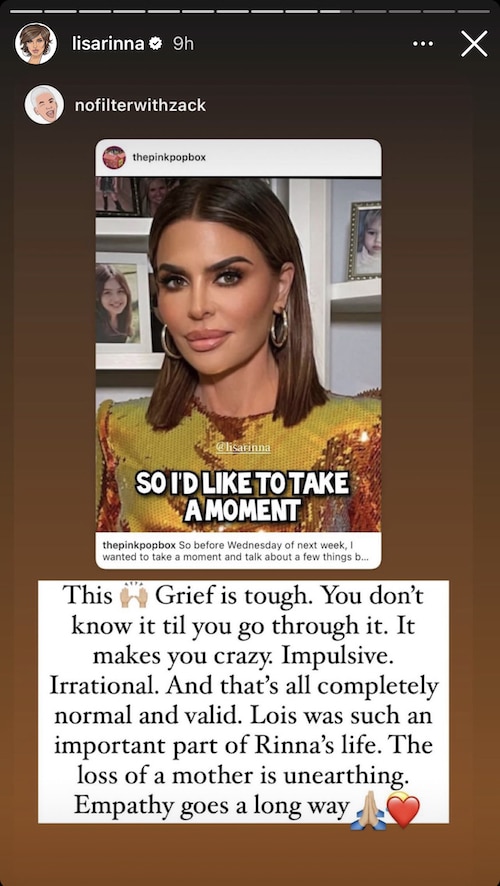 Zack’s message came in response to a much lengthier message, which was originally posted by the Pink Pop Box Podcast on Instagram and later reshared by Lisa.

“So before Wednesday of next week, I wanted to take a moment and talk about a few things before we watch that episode. From the beginning of this season, [RHOBH] has been a little darker than it normally is. We had [Dorit Kemsley]’s home invasion, then we have that table debacle created on Watch What Happens Live, then we had the La Quinta setup by which gave us three episodes of the word dark all while we lost dear Lois.”

According to the fan page, the cast should have been “rallying around” Lisa in Mexico rather than continuing to pile on Crystal Kung-Minkoff amid her feud with Sutton Stracke, especially considering Rinna “has not really done anything horrible” this year.

“I won’t lie that night on social media when Lisa returned after Lois passed, the outpouring love was beautiful but unfortunately it was super short lived I don’t know why we do that. Why do we say oh I’m so sorry about your mom but the next week we’re like it never happened. No one discussed it or asked her how [are] you doing?” the page continued. “What I’m not seeing although I’m sure in some moments it has happened, is we’re not seeing these women reach out to her. We’re not seeing her moving through these very important moments and it was a missed opportunity like I said before.”

Although the page acknowledged that we can’t go back in time, they noted that a lot could have been learned from what Lisa endured after the death of Lois.

They then noted that viewers should “work a little differently and reach out with kindness” as Lisa is seen enduring her meltdown on Wednesday’s new episode.

“Check in on her. A few days later. You know she may not answer your DM or just tag her in your story and say I’m thinking about you today. Or just a simple you hang in there. But this isn’t about a table or a word this is about a loss of a mother. Just remember that this week,” they advised.

And in response to the sentiments, Lisa wrote, “Thank you this is beautiful.” 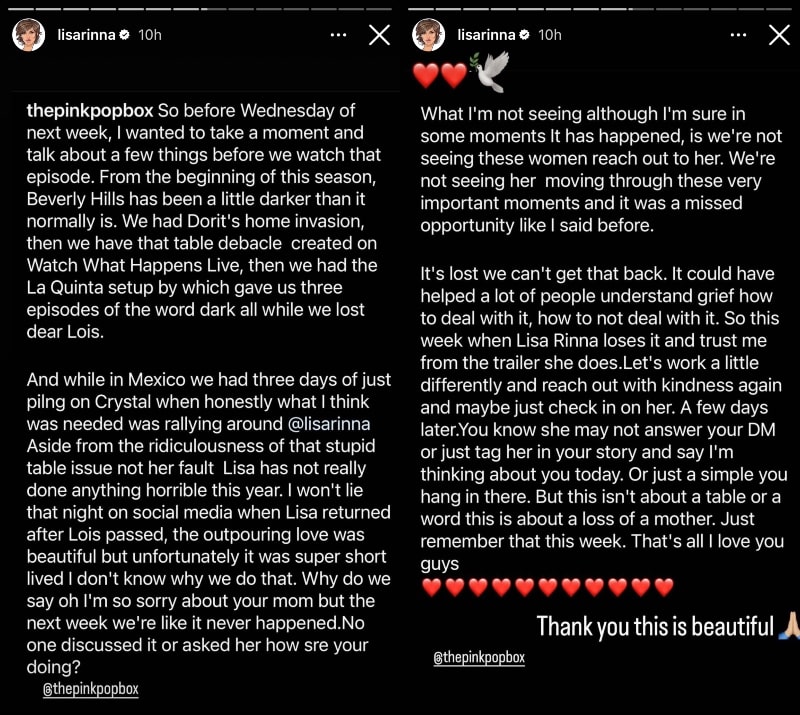 As RHOBH fans may have seen, Lisa addressed her mother’s passing during a recent episode of WWHL, confirming that she was in a better place after having to wait seven months to lay Lois to rest.

“I think what really has helped me is we just got to lay my mother to rest last week,” Lisa shared. “In Oregon, it’s very cold in November and December and foggy, and [Lois] wanted [the funeral] in the summer… [But] to wait seven months I think was very difficult on me.”

The Real Housewives of Beverly Hills season 12 airs Wednesdays at 8/7c on Bravo.

Does “ProDentim Candy” Worth $49 Price in Canada?