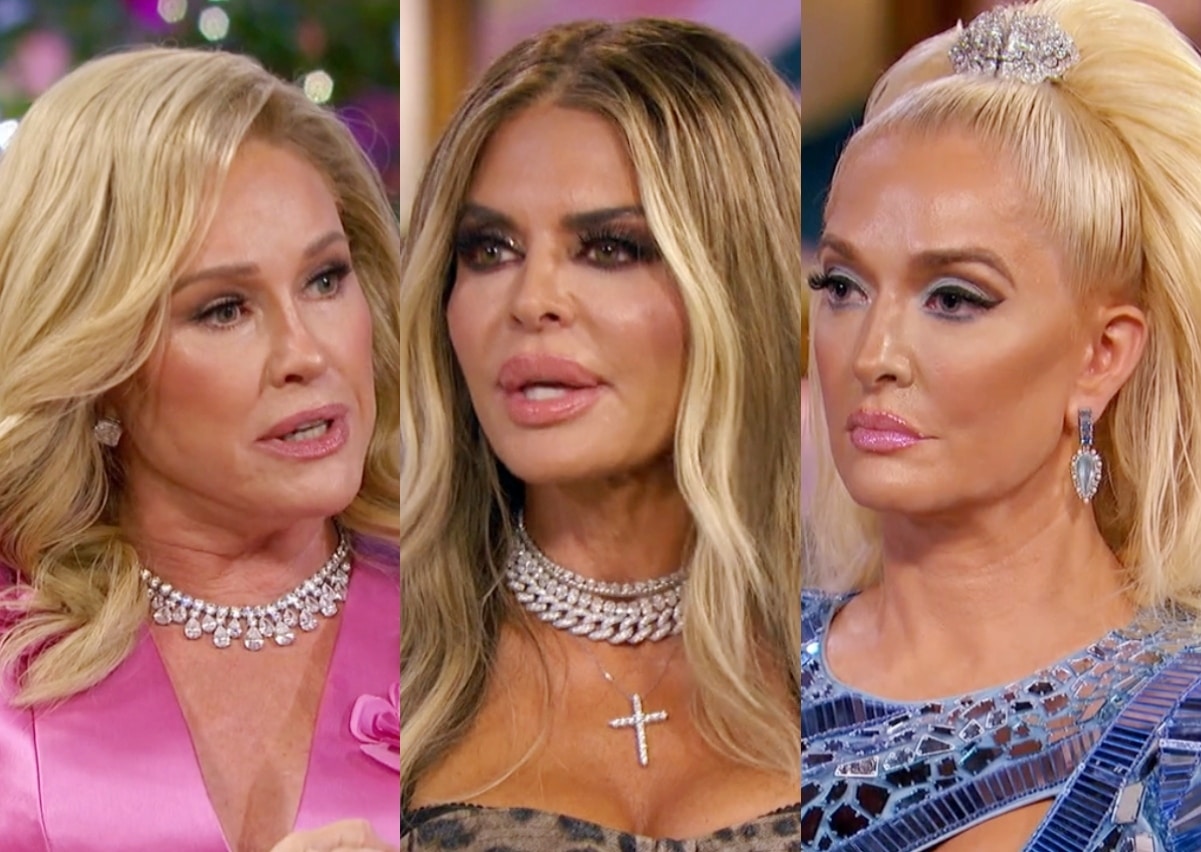 It’s part three of the Real Housewives of Beverly Hills, season 12 reunion. Kathy threatens to give Rinna a lie detector test (now THAT would be quality television) and Kyle is frustrated with the whole situation.  The Fox Force Five seems to be dissolving right before our very eyes, all because Rinna can’t seem to stop talking about Kathy’s “psychotic break.” It’s all very…messy.

It kicks off on a light note, where we talk about the ladies getting some “good d.” Sutton gets picked on for wearing that cat sweater on her date and Erika shares that she “had some last night.” I guess everyone has pre-reunion prep, right?  Erika goes on to say she has a roster and is thrilled to hear that men can stay hard the whole time. Gross.

Speaking of Erika, the topic of her blacking out gets brought back to light. Erika shares that she was using her drinking to numb her pain and owns it.  Garcelle reflects on the incident with Jax, where Erika, in a drunken stupor, told Jax to “get the f*ck out” of his own mom’s party.  Garcelle why Erika would lash out that way to her son, and Erika tries to make it better by saying it wasn’t directed to him.  Right.

Andy calls Kyle out for cracking up about the incident with Dorit and their husbands. Garcelle can’t comprehend what would be funny about the comment and questions why Dorit did not try to control Erika at the time. Dorit tries to save face by claiming she was taken aback.

Erika goes on to share some good news: “The court concluded that there is no knowledge of Erika’s participation in any wrongdoing.” She once again makes it clear that she does not share in the responsibility of Tom Girardi’s “victims.”  She repeats that she will do what she needs to do to get a hold of her life, and since this judge just ruled in her favor, things are looking up.

Erika tells Dorit that she is helping herself now so that she can help the victims in the future.  She blames her harshness and behavior on her need to survive and admits that she did not like who she was this season. Erika clarifies to Kyle that she was not out of control in Aspen, but that she was angry. There is a difference- duh!

Kyle explains that she was trying to help Erika, but Erika claims she has been showing empathy.  Erika, speaking in third person, cannot continue to be berated and so she will not back down. She admits to wearing the earrings in Aspen and we find out that Erika is on appeal, for legal reasons, to get the earrings back. None of the ladies would keep the earrings… because they have hearts.

Erika shares that she spoke to Tom last week. Interesting that she has “humanity” for Tom, the guy who got her into this mess, but not for the innocent victims.  SMH. Erika states she has never whined about her past life of luxury and now she is simply fighting for herself. And she actually sheds a tear!

Kathy heads on to the set, looking very “Barbie chic” and she plops down, right next to Kyle. Rinna looks ready to pounce and Andy is thrilled to see that Kathy is wearing heels, and not her hotel slippers. Kathy throws shade at Rinna and her social media behavior right off the bat and we jump into Aspen almost immediately.

Kyle looks like she is about to have a panic attack as the footage rolls. As we revisit the events that were caught on camera and listen to Rinna’s accusations of what Kathy said, Kathy taunts Rinna with, “You wanna swear on your life on a bible?”

Why can’t we just show Kathy’s tequila some love? Kathy makes it clear that she was mad at Kyle when Rinna ordered Kendall Jenner tequila because she thought Kyle planned to highlight her tequila that night. Kathy admits that she overthought the way it played out and Rinna jumps in to apologize. Kyle makes it about herself and starts crying, claiming everything was her fault. Kyle tearfully says she didn’t do anything, and she was only trying to host a party.

Andy wants to talk about later in the night when “they all went clubbing,” (LOL) and Kathy tells her side.  She says that when she was not heard by the DJ, she offered money to the manager to put some requested songs on for the group. She states that the manager told her to go back to LA and that is what set her off.  Allegedly, Kathy told Kyle it was time to go, and Kyle did not like the way Kathy demanded her to leave.

The ladies try to corroborate the stories and Erika claims that Kathy called the DJ an old, white f*****. Kathy states that she doesn’t even talk like that, and Erika says she has nothing to lie about.  Kathy reminds Erika that she has “more credibility” than she does, and that the investigation led by HR was inconclusive. Erika believes that Kathy is reaching and is just trying to “save herself.”

Rinna jumps in to say that Kathy’s meltdown started in the sprinter van: “Screaming, venting, and saying things that I have never heard in my life.” Silly Kathy for thinking she could trust Rinna. Kathy does a stellar impression of Rinna and reminds her that halfway through the infamous venting session, Rinna said, “I get it, I get it. You’re preaching to the choir.” As Andy rattles off all the things Kathy allegedly said in her meltdown, Kathy interrupts Rinna to say nothing is true and she threatens to make Rinna take a lie detector test.

Rinna calls it all heartbreaking and Kathy tells Rinna that the text seen on TVs around the world never even came from her!  Rinna claims Kathy was having a psychotic break and demands Kathy tell the group what she said.  Kathy simply said she feels dismissed by Kyle at times, to which Kyle reminds the ladies that because this information got leaked out to the press, the situation got worse. Garcelle reminds them that nothing stays within the group anymore- it all goes out on social media first.  To that, Rinna claims she got a call from TMZ asking about what went down at the club, so the news was already out there.

Kathy apologized to Kyle on camera and was annoyed that Rinna came in for an apology as well.  Kathy tells Rinna, “Baby you wanted it on camera because your contract was coming up and you needed some drama.” Kathy believes that Rinna drove LVP off of the show and that she has had problems with everyone.  She lets Rinna know, “you are the biggest bully in Hollywood and everyone knows it.”

Rinna, still trying to keep the story going, claims Kathy “abused me, it was abusive. Abuse doesn’t have to be hitting someone.” Andy reminds Rinna that she has screamed and yelled at people!

Andy wonders why Rinna would try to get in the middle of sisters and Rinna states that she was “traumatized” by the incident because it happened…wait for it, “in the dark.” After telling Kyle and Kathy she has absolved herself from the situation, she tells Kathy, “I saw the devil, you were a f*cking monster, and that was that.”

Kyle cries that she feels put in the middle of the situation and is tired of getting blamed for everything.  She tearfully says that she is the one who gets f*cked every time and she is exhausted by it. Kathy calls Kyle a martyr and Rinna sits back watching the show with glee on her face. Kathy is “shocked” (Rinna from the corner, “I was shocked, too”) and Kathy is still not happy with Kyle cuz she “hasn’t said two words” in her defense.  Kathy exits, leaving Kyle in shambles.

Kyle asks Andy if she can leave before the toast because she is an absolute wreck. Andy promises to make it snappy and addresses Kyle’s hope that she can make amends with Kathy. Rinna brings up grieving and Erika is happy about her recent legal progress.  Dorit feels lucky, despite her woes, and Crystal’s challenges have made her a stronger person. Sutton talks about the importance of forgiveness and Garcelle hopes for more fun in the future. Andy has ordered “carcass out drinks” ala Dorit and does not force Kyle to toast with the phonies.  He gives her a big hug and knows that she is going to be facing one helluva uphill battle with Kathy.

When Dorit checks in with Kyle 5 minutes later, she begs Kyle to stop being so upset and says if Kathy “makes you pay for the sins of others, it’s on her.” Currently, the sisters are still not in a great place…I guess only time will tell…

WHAT ARE YOUR THOUGHTS ON THE RHOBH REUNION?

Children with learning differences are being excluded