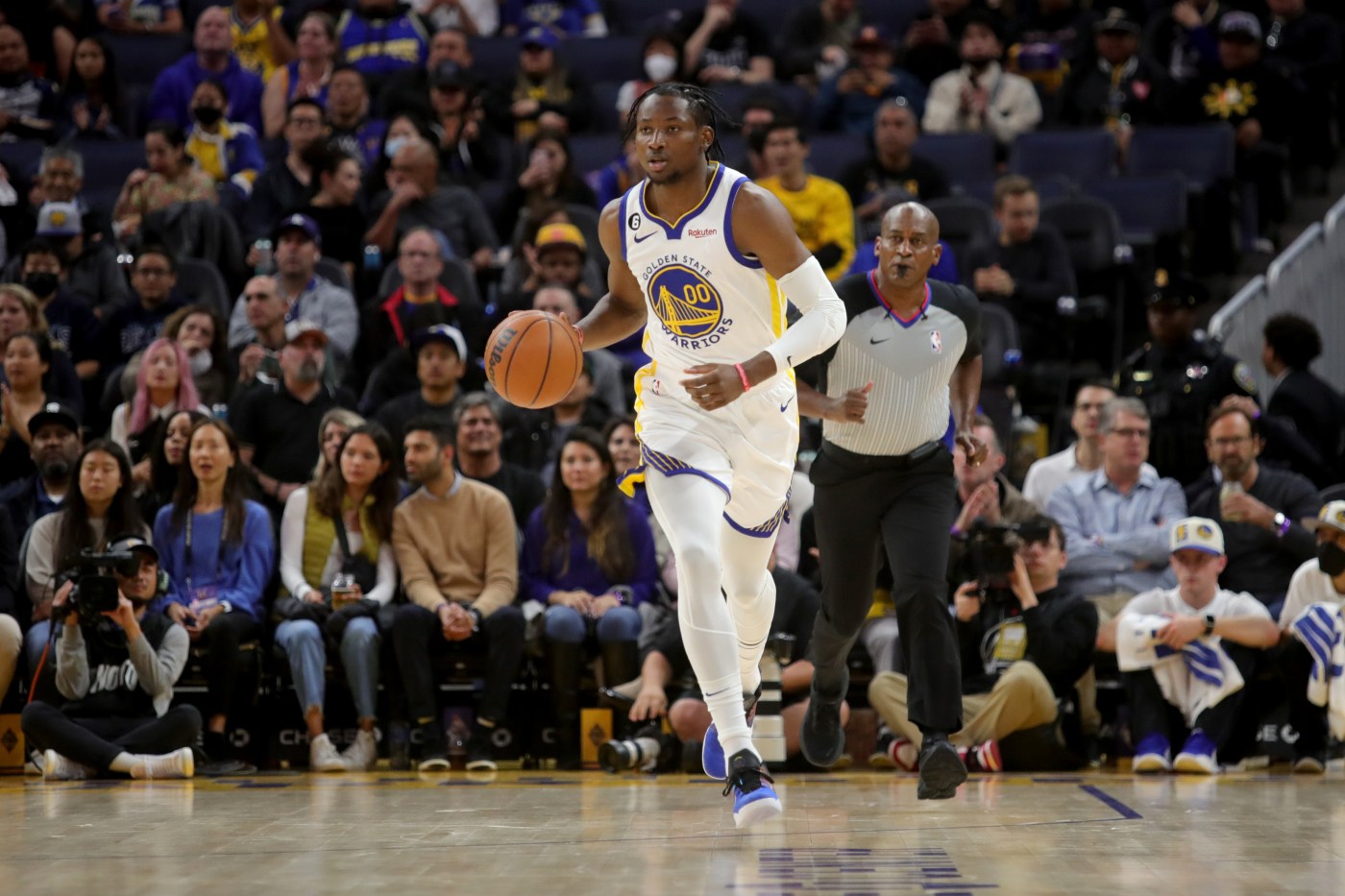 SAN FRANCISCO — Coach Steve Kerr can sense the frustration bubbling within Jonathan Kuminga during the first week of the season.

Kuminga hasn’t played more than 15 minutes in a game and found himself as the odd man out of the rotation in Thursday night’s win over the Miami Heat.

“He’s not happy and I don’t want him to be happy,” Kerr said of Kuminga. “I want all of my guys to want to be out there. But it’s a necessary part the growth to learn how to win, learn how to be a part of combinations. We have to put the best combination on the floor right now that are going to help us win games.”

It’s difficult to manage a rotation bigger than 10 players. The Warriors went with Moses Moody who helps with floor spacing and Ty Jerome for his playmaking abilities. That left Kuminga to watch the team win its third game from the bench.

Of course, Kuminga was thrilled the team won, improving to 3-2 on the season. That’s the priority after all. But Kuminga also couldn’t help but let his mind wonder as to why he didn’t play.

Kuminga possesses the raw talent, athleticism and upside to develop into a high-caliber NBA player. But it’ll take time and reps to get there. And that’s part of the problem. The Warriors don’t have enough minutes for Kuminga, especially at his position which is jam packed with other players.

Kuminga has played the least amount of minutes among top-10 picks from the 2021 draft picks. A big reason for that is because those other players are on non-contending teams, where the end-of-game results don’t matter as much. Kuminga is on a shorter leash with the reigning champions and unable to play through as many mistakes.

Kerr has talked about the delicate balance he must strike as a coach developing young talent on a championship-contending team. On one hand, he wants to put his squad in the best position to win. On the other, Kerr has to manage a young player’s ego that might take a hit when he doesn’t get much action on the court.

“Jonathan’s time will come,” Kerr said. “He’s very talented, he’s just got to keep working and things will go well for him as long as he just stays on the path. This is how it goes for young guys on championship teams. There’s just no free minutes. But the development comes every day… with coming to practice and getting the work in every single day so he’s working hard, he’s staying ready and his time will come.”

Kuminga said his confidence won’t waver, noting the obstacles the No. 7 overall pick of the 2021 NBA draft had to overcome just to make it to the league as a teenager.

“I just got to stay working on my game and just get better,” he said. “Whenever the time [comes], I’m going to be available. That’s pretty much what my focus [is] moving forward from now. That’s what it is. I’m staying respectful, do what I got to do. Just gotta work.”

Kuminga has found comfort in practicing alongside Andre Iguodala. The two share neighboring lockers. The 19-year NBA veteran has served as a sounding board for Kuminga and been one of his biggest cheerleaders, with Iguodala coming to Kuminga’s defense when he was accused of having a bad attitude last offseason.

Iguodala continues to be complimentary of Kuminga, noting this last week of work has be “really good.”

“The biggest thing with him is just making sure that he stays confident and in good spirits,” Iguodala said. “And if he’s not in good spirits, understanding it’s not a bad attitude, it’s actually a good thing. You would want a guy to be upset if he’s not playing.

“He’s done a really good job at staying positive, staying hungry, just being ready for his moments. Everybody expects him to have huge nights every single night, you know, with our team, we have so much depth. It’s hard for anyone outside Steph or guys that shoot a lot of balls to consistently get comfortable so he’ll get there and be fine.”

The Warriors still see Kuminga as a major part of the organization’s future. In the meantime, they hope he can turn any frustration into motivation and fuel to work even harder. And that’s exactly what the 20-year-old plans to do.

“I’m going to keep my head up, stay in the gym, work on my stuff, get better every day and just get ready,” he said.

Kuminga should see more playing time on the upcoming road trip out east that features five games in seven days and includes a pair of back-to-backs to start and end the excursion. But he’ll continue to have to practice patience as Kerr gives other combinations looks.

“I love playing basketball, and being on the bench every time, it’s not fun,” Kuminga said. “Hopefully I get to play.”

Best Things to Do in & Near Shelburne, NS