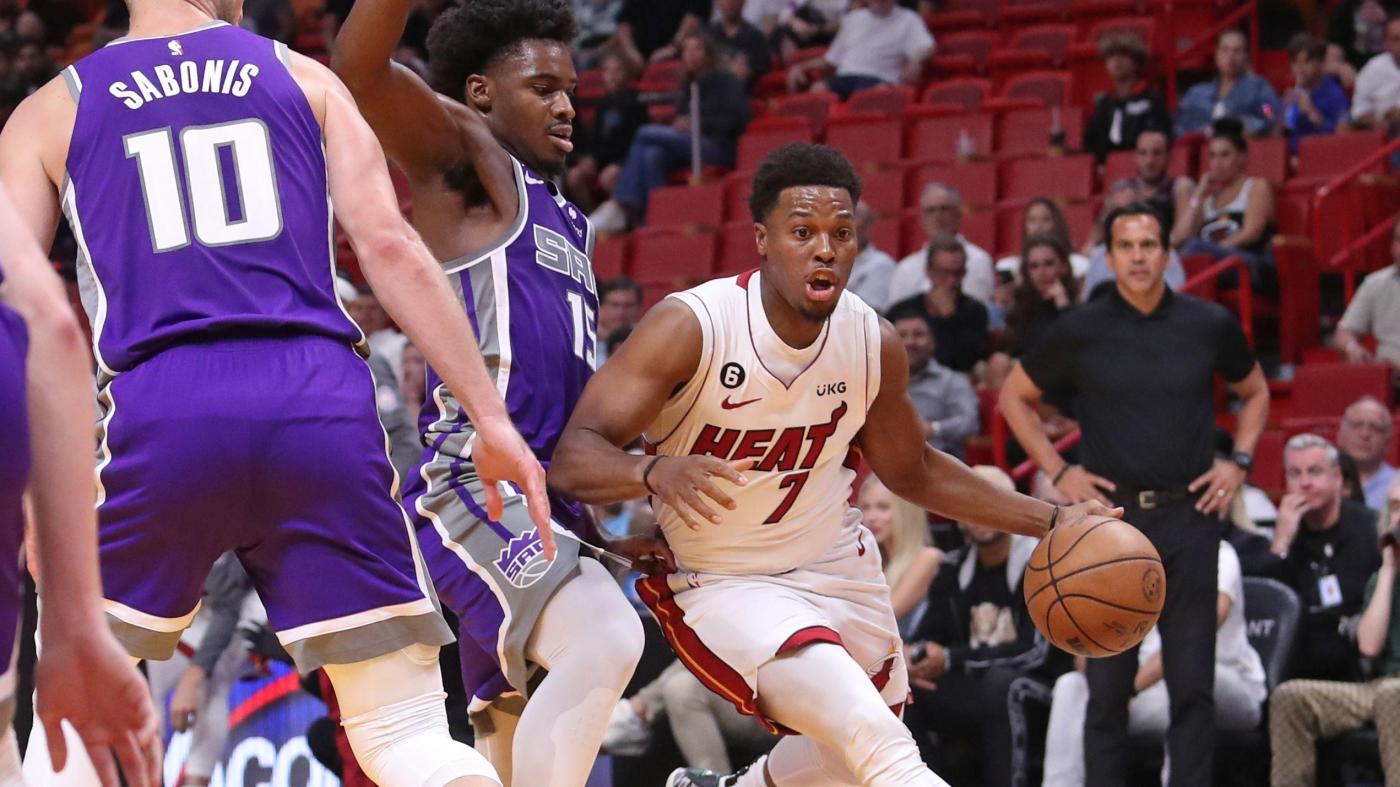 The difference this time was Jimmy Butler was not there at the finish to save the night at FTX Arena, as he did a night earlier in the victory over the Golden State Warriors.

Perhaps it was hubris by the Miami Heat, thinking they could rest Butler on a night the Sacramento Kings were without ailing De’Aaron Fox. Perhaps Butler’s hip actually was sore.

But with Butler unavailable, closing time turned into something far different Wednesday night, but equally satisfying, with the Heat pushing past the Kings 110-107.

The game was decided when Tyler Herro converted a 3-pointer in a 107-107 tie with 2.5 seconds to play, on a double-pump attempt, closing out his 26-point, 12-rebound night.

“I got all the space I needed to knock it down,” Herro said.

The climb to .500 from the 2-5 start now can be achieved as soon as Friday night on the road against the Indiana Pacers.

Without Butler, and before Herro’s heroics, the Heat turned to Kyle Lowry, with the point guard closing with a season-high 22 points, seven assists and five rebounds. There also was a quality Heat contribution from Bam Adebayo, who closed with 20 points and 11 rebounds.

Off multiple passes, the Heat got the ball inside to Sabonis with 12.5 seconds to play, with his free throws tying it 107-107.

That set up the decisive sequence, and Herro’s 3-pointer with 2.5 seconds to play.

2. Herro ball: With Butler out, Herro became the Heat’s closing creator out of necessity.

Herro not only stepped up with timely jumpers, but also again stepped forward on the glass, as the Heat continue to close with smaller lineups, in this case Gabe Vincent playing in place of Caleb Martin.

Herro closed with 13 of the Heat’s 33 fourth-quarter points.

3. Lowry early: With Butler out, Lowry was far more active at the outset than in recent games, at 4 of 5 for 10 points and two assists in his initial seven-minute stint, the game’s first player to reach double figures in points.

He then was up to 12 points by the end of the opening period, his highest-scoring first quarter as a member of the Heat, matching his previous season high of 17 points by the early stages of the second period.

Lowry this season typically had prioritized getting teammates involved before turning to his own offense. The absence of Butler on Wednesday night changed that approach.

4. Rotation readjustment: With Butler given the night off after Tuesday’s heroics against the Warriors, listed with tightness in his left hip, Strus was shifted into the Heat starting lineup.

While the rest of the starting lineup remained intact, with Adebayo, Martin, Herro and Lowry, there was a three-player substitution midway through the opening period, with Dewayne Dedmon, Duncan Robinson and Vincent entering.

That proved to be the limit of the rotation, going just eight deep on the second night of the back to back.

Strus, coming off a game-high 24 points performance in Tuesday’s victory over the Warriors, had the Kings’ attention, his first shot not coming until he converted a 3-pointer 36 seconds into the second half.

5. Dedmon steps up: Seemingly refreshed from his two-game break last week, Dedmon was up to eight points and six rebounds by half, also at 2 of 3 on 3-pointers, and then with 10 points and eight rebounds going into the fourth quarter.

That contribution was necessary, with Adebayo called for three first-half fouls.

With his big-muscle approach, Dedmon again showed why he has a place in the rotation, this time utilized for 15:54.

How much were the 10 most expensive reported home sales in Danville, San Ramon, Dublin, Pleasanton the week of Oct. 24?