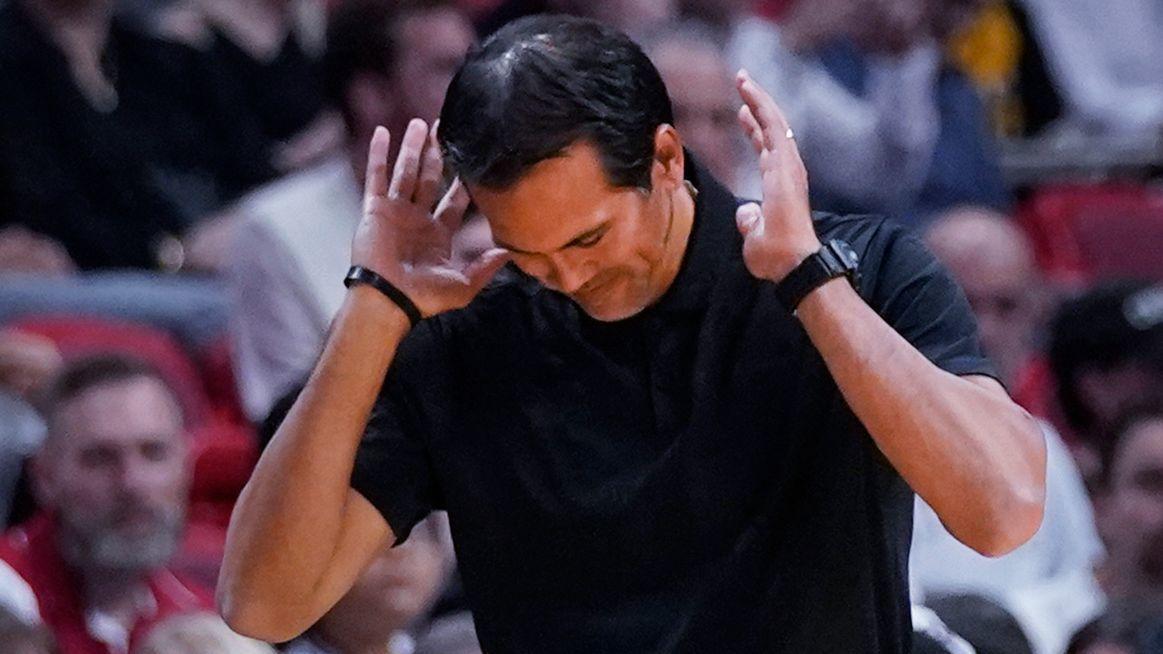 With an NBA that is somewhat upside down at the moment, including the defending champion Golden State Warriors arriving Tuesday to FTX Arena winless on the road, Miami Heat coach Erik Spoelstra struck a more optimistic tone after Monday’s practice.

Two days after questioning his team’s cohesion following a road loss to the previously winless Sacramento Kings, Spoelstra said there still have been enough encouraging moments during this 2-5 start to foster hope.

“We’ve seen the vision of what it can look like,” he said. “We just have to get to that more consistently. And it takes intentional thought and collective commitment to do that, which we’re fully capable of.

“At least we know what it can look like. There’s teams in the league that don’t have that vision and haven’t been able to put together a lot of quality minutes. We have. We’re closer than we are further away from it. But when you add losses to it, sometimes it can feel like you’re far away. But we’re not that far away.”

Spoelstra said Monday was a forward-thinking session, with three games in four nights to follow, including Wednesday at home against the Kings and Friday on the road against the Indiana Pacers.

“Today was all about just solutions and continuing to get better as a basketball team,” he said. “There’s quite a few teams that are trying to figure it out. That’s it. It’s the beginning of the season. We have an urgency right now to get to our identity more consistently.”

With 13 players returning from last season’s roster, the expectation was of picking up where leaving off as Eastern Conference regular-season leaders.

“One way or another, whether you’re bringing back a similar crew in different kinds of roles and different starting lineup, a slightly different rotation, it’s going to be different,” Spoelstra said. “You have to develop trust. That’s what the regular season is for. It’d be the same if you brought in eight new faces. You’ve got to start over each year, and not assume anything, not skip steps. And that’s all we’re doing right now.”

Among the Heat’s adjustments has been to the elevation of Tyler Herro into the starting lineup. Herro twice this season, including with his season-high 22 in Sacramento, has attempted 20 or more shots in a game this season. By contrast, the single-game highs for the team’s other primary scorers are 17 for Jimmy Butler, 16 for Bam Adebayo, 15 for Mac Strus and 13 for Kyle Lowry.

“You give the ball,” Lowry said of Herro. “Most games, he’s going to shoot the most times. He’s going to be our most-field-goal attempts guy, and we have no problem with that. That’s what he does.

With undrafted rookie Jamal Cain leaving the Heat for their G League affiliate over the weekend, Spoelstra said the plan eventually will be the same for guard Dru Smith, the team’s other two-way player, and possibly for first-round pick Nikola Jovic, as well.

“It’s important. He had a good practice while we were in Sac,” Spoelstra said of Cain. “But other than that, now once you’re getting into the season, that’s the plan, to spend time there, at training camp and games. All that will be really important for his development.

“And then he’ll be spending time here. We’ll send Dru. We’ll work out that schedule. And then if we get fully healthy, there might be some good opportunities for Niko to get there, as well.”

Two-way players can be on the NBA active roster a maximum of 50 games during the regular season. Cain has been active for two, Smith for all seven.

While center Dewayne Dedmon was back at practice after missing the two games due to a foot ailment and an illness, both guard Victor Oladipo (knee) and center Omer Yurtseven (ankle) did not participate in Monday’s practice and later were declared out for Tuesday’s game.

Oladipo and Yurtseven have yet to play this season. Jovic and 42-year-year captain Udonis Haslem took Dedmon’s minutes for the two games he was out.

For the Warriors, former Heat forward Andre Iguodala (hip) and guard Donte DiVincenzo (hamstring) are out.

Why She Didn’t Defend Kathy at RHOBH Reunion