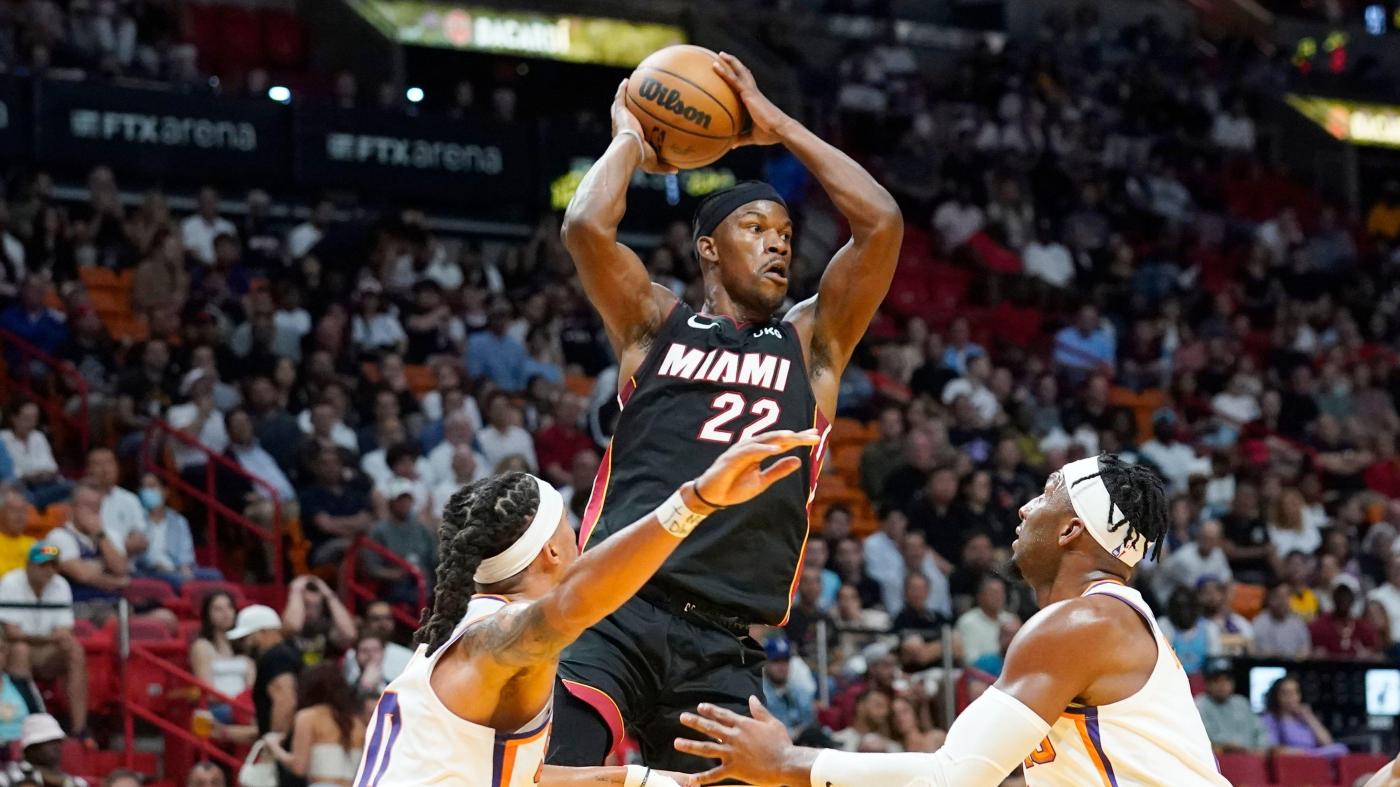 Monday night, the cardiac Miami Heat were back at it, this time in a 113-112 victory over the visiting Phoenix Suns.

In a season when seemingly only the final buzzer has decided the Heat’s outcomes, with Saturday night’s blowout of the lowly Charlotte Hornets a rare exception, it was back to the heart-stopping heartbeat of the season.

From there, attack mode from Bam Adebayo, dogged defense from Jimmy Butler, and, for the first time this season, a .500 record, at 7-7 going into a four-game trip.

“Those two guys are really the foundational heartbeat pieces to our team,” coach Erik Spoelstra said of Adebayo and Butler. “We follow their warrior spirit.”

Adebayo and Butler each closed with double-doubles, Adebayo with 30 points and 10 rebounds, Butler with 16 and 13.

“I love it for a basketball team,” Spoelstra said of so much late-game drama so early in the season, “because you get real experience to talk about instead of hypotheticals.”

For the Heat, there also were 15 points apiece from Lowry and Caleb Martin, with all three Heat reserves seeing action – Gabe Vincent, Duncan Robinson and Dewayne Dedmon – each scoring in double figures.

“We played extremely tough down the stretch,” Lowry said.

“We’re starting slowly to develop the necessary grit and perseverance that is necessary in this league,” Spoelstra said.

1. Closing time: The Heat fell behind by those 13 points early in the fourth quarter, before then rallying within 102-99 with 5:18 to play on a series of acrobatic 3-point plays by Adebayo. An Adebayo transition dunk then made it 102-101.

“I was just in my wheelhouse tonight,” Adebayo said.

The Heat won off a solid defensive stand that included a blocked Booker shot by Butler and a missed Booker 3-point attempt, tightly guarded by Butler, just before the buzzer.

“I got lucky to not foul and block his shot,” Butler said.

Adebayo said it was more than luck.

“That’s one that goes down in history,” Adebayo said of Butler’s block. “That’s the Heat culture way, getting a stop in the last 10 seconds.

2. Before that: The Heat led 35-31 after the first quarter, with their 7 of 10 on 3-pointers giving them their high for 3-pointers in a period this season. There then only were two more threes in the second period, with the Heat taking a 58-57 lead into the intermission,

The Suns then went up 11 in the third quarter before the Heat moved within 91-84 going into the fourth, after an unlikely pair of Dedmon 3-pointers.

For all the back and forth, what stood out most to Suns coach Monty Williams was his team tying a franchise record with just four free throws, making two.

“That’s hard to swallow,” he said.

The four attempts and two conversions are record lows by an opponent over the Heat’s 35 seasons.

3. Butler can: Butler continues to step up to challenges as required, this time with a season high in rebounds.

All the while, Butler took the defensive challenge against Booker.

“He comes alive against the best challenges in the league,” Spoelstra said.

The question now becomes whether the Heat can afford to continue to ask so much on a nightly basis from their 33-year-old leader this early in the season.

With Tyler Herro again out and Max Strus scoreless through three periods, it only further upped the challenge.

“I love the fact that we won this game on the defensive end,” Butler said.

4. Still out: It was a fourth consecutive game for the Heat without Herro, who continues to take treatment on a balky ankle sprain.

“You just never know with ankle sprains,” coach Erik Spoelstra said. “They’re never on necessarily your timeline. So he just doesn’t have the mobility yet. But he is getting better, making progress.”

The next marker will be whether Herro is on the team flight Tuesday to Toronto, the first stop of a four-game trip.

5. Under the knife: Center Omer Yurtseven confirmed pregame to the Sun Sentinel that he will undergo surgery Tuesday for the fractured bone spur on his left ankle.

Yurtseven said he tried to manage the injury, but that surgery became inevitable.

He said a recovery timetable will not be determined until after the process. He is expected to miss at least three months.

OLED vs QLED – Which TV Is Best For You?