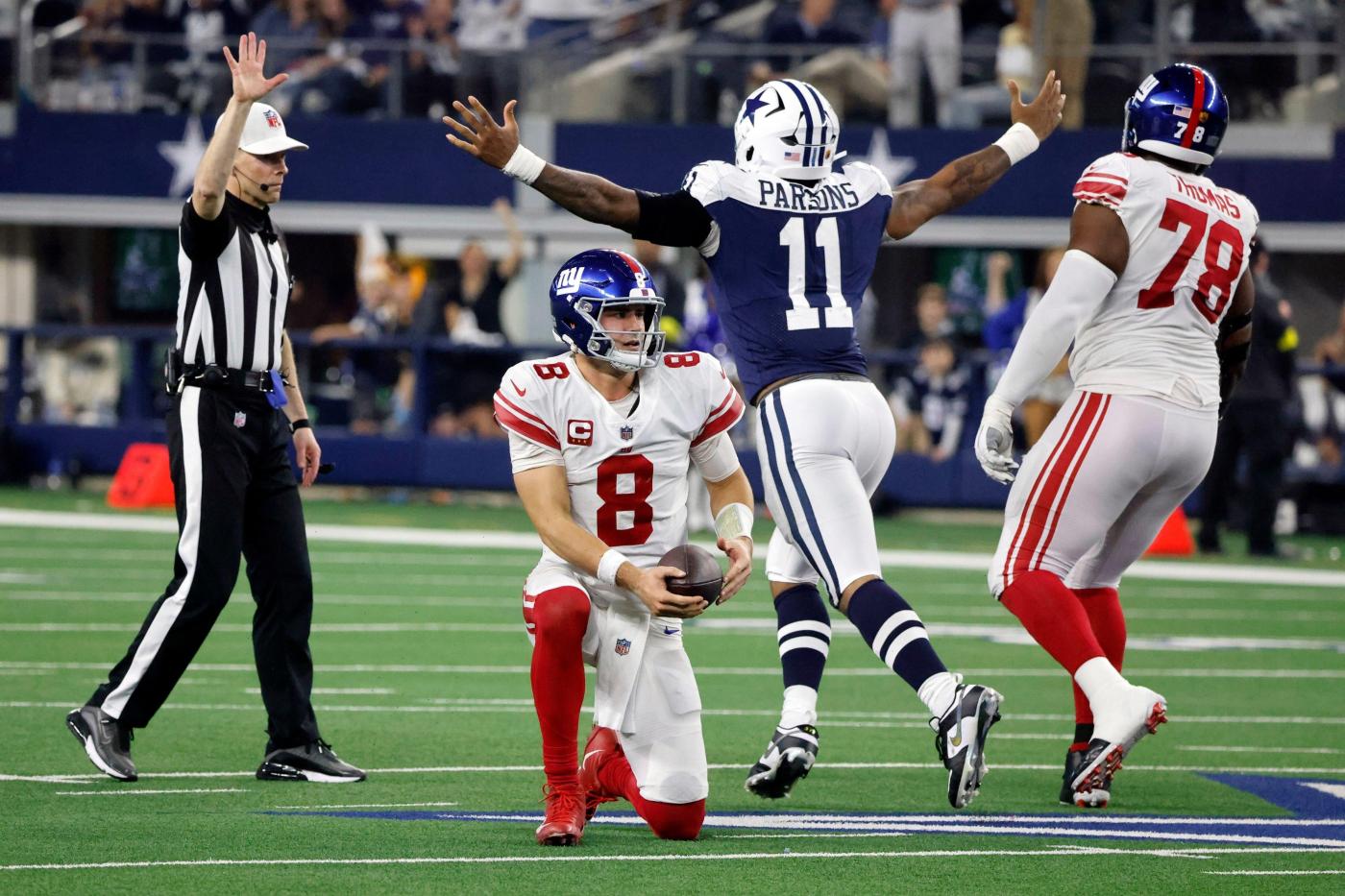 ARLINGTON — The Giants got their turkey cooked on Thanksgiving Day, and Odell Beckham Jr. inched one step closer to becoming a Dallas Cowboy.

The Cowboys romped to a 28-20 NFC East holiday win at a rowdy AT&T Stadium, holding the Giants scoreless for most of the second half until a garbage time Daniel Jones 1-yard TD pass to Richie James with eight seconds to play.

The Giants’ banged-up secondary had no answer for Lamb with three of their four starters out, despite two first-half interceptions of Dak Prescott.

Dallas edge rusher Micah Parsons recorded two sacks. And Saquon Barkley was held to 39 rushing yards, in addition to dropping a huge fourth down Jones pass in the third quarter. Barkley has 61 total rushing yards in his last two games.

Beckham, the highly-coveted free agent receiver, plans to visit the Giants, Cowboys, and Bills, while continuing conversations with the Ravens and Chiefs, per CBS insider Josina Anderson.

Beckham’s Cowboys visit is scheduled for Dec. 5, according to FOX’s Jay Glazer. And Giants brass plans to huddle and discuss when OBJ would stop by East Rutherford, N.J. again.

But it’s entirely possible at this rate that the Giants and Beckham may table their mutual interest in a reunion for 2023 and beyond.

The Giants (7-4) have lost three of their last four. Their four-game NFC East stretch continues with a Week 13 home game against the Washington Commanders (6-5) in 10 days. Washington hosts the Atlanta Falcons on Sunday afternoon.

The Cowboys (8-3) reasserted themselves in second place in the division behind the Philadelphia Eagles (9-1), who host the Green Bay Packers on Sunday night.

The Cowboys outscored the Giants 14-0 in a lopsided third quarter — on two Prescott TD passes to tight end Schultz — to take a 21-13 lead into the fourth.

Dallas controlled possession for almost 10 minutes (9:44) of the 15-minute quarter, starting with a 14-play, 75-yard drive that culminated with a 15-yard TD pass to Schultz on 3rd and goal.

Then Barkley dropped a 4th and 1 pass from Jones when Brian Daboll rolled the dice on 4th and 1 from the Giants’ own 44-yard line with 4:07 left in the third. The pass was low and behind Barkley, but he still should have caught it.

Cowboys defensive end DeMarcus Lawrence had trash-talked the Giants’ sideline prior to the play, with his hands out saying “bring it on.” And the Giants inexplicably had only 10 players on the field for that pivotal play.

Schultz then caught a 6-yard TD pass with 2:02 left in the third quarter to put the Giants on their heels entering the fourth.

The Giants led the Cowboys, 13-7, at halftime despite being outgained 208 yards to 160 and surrendering 92 rushing yards to Dallas.

Prescott shot Dallas in the foot with two first-half interceptions to Giants corner Rodarius Williams and safety Julian Love — which matched the Giants’ interception total through their first 10 games.

The Giants’ secondary did that with three of their four starters out due to injury.

And a third penalty by corner Trevon Diggs canceled out a late second quarter interception by safety Donovan Wilson.

Giants kicker Graham Gano hit 57-yard and 47-yard field goals. He made the first for an early 3-0 lead after a fourth down stop of Ezekiel Elliott by ex-Cowboy Jaylon Smith at Dallas’ 40-yard line.

Giants corner Darnay Holmes then broke up a Prescott throw intended for Lamb that Love picked and returned to the Giants’ 31-yard line with 1:50 to play in the half.

And Gano made his second field goal at the halftime buzzer for the six-point lead. The Giants were fortunate to lead despite Barkley having only 29 rushing yards at the half.

They never got him going — or themselves going — in the second half to hold on.

U.S. vs. England in a potentially decisive meeting