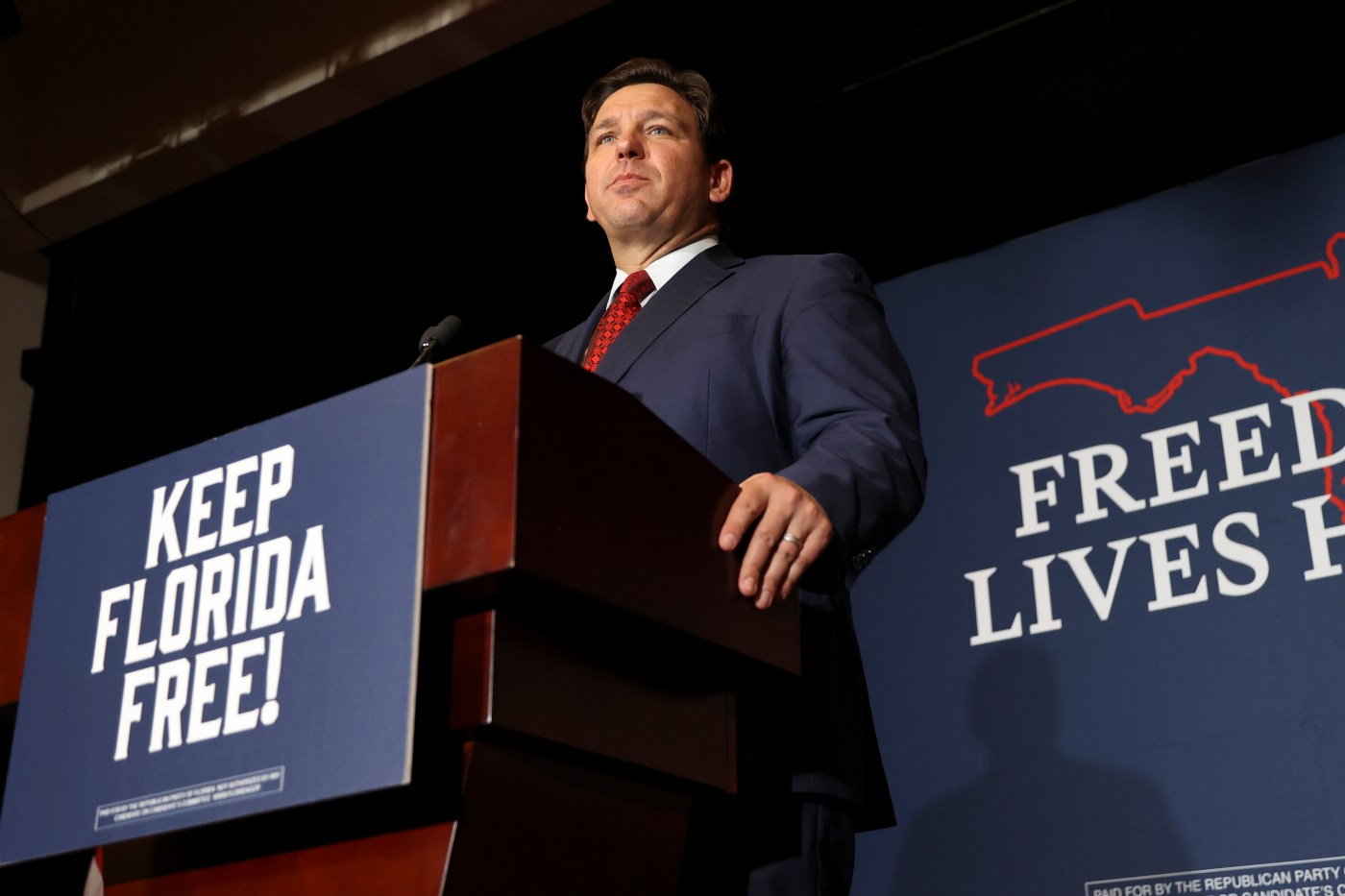 Florida Gov. Ron DeSantis was walking down the street when he heard it — the blood-curdling sound of children being ruthlessly exposed to diversity.

Faster than you can say, “political hack,” he ducked behind a handy mango tree. Moments later, gone was the mild-mannered governor of a great southeastern state. In his place, clad in the teal unitard and pink cape that strike terror in purveyors of compassion everywhere, stood . . . Captain Florida!

Wasting not an instant, the sunshine avenger scanned the horizon with his opportunistic vision until he spotted the source of the sound. There, in a middle school classroom, the Woke Monster towered over two boys.

“You know,” the Woke Monster was saying, “it shouldn’t matter if another kid is gay or transgender, should it? What matters is what kind of person they are.”

The boys never got to respond, because at that precise moment, Captain Florida came crashing through the window. “Eat restrictive legislation!” he cried as he slugged the Woke Monster.

“Not on my watch!” snarled Captain Florida as, with another mighty blow, he vanquished the Woke Monster, as another teacher decided she’d rather get her real estate license.

Except, of course, Churchill was only talking about Nazis. He didn’t know about real threats, like “woke.”

But Captain Florida did. And now he posed with arms akimbo, scanning the horizon for new dangers. The kids gaped.

“Who’s going to teach us math?” asked the first boy.

“Wait a minute,” said the second boy. “Captain Florida, aren’t you the one who attacked that Miami restaurant for hosting a Sunday brunch where drag queens perform?”

“Yes,” said Captain Florida, “I did fight the Legion of Cross Dressers.”

“And didn’t your election cops just arrest some former felons for voting,” asked the first boy, “even after the state told them they could?”

“Dr. Voting Fraud. One of my toughest foes.”

“And you even picked a fight with Disney World, didn’t you?” It was the second boy again. “They opposed your ‘Don’t say gay’ bill.”

“My dad thinks you’re a jackass,” said the first boy.

Captain Florida gave him a sharp look. “Your father doesn’t understand my mission. I fight for freedom.”

“But who’s going to teach us math?” the boy demanded again.

Captain Florida wasn’t listening. “You see, boys, someday I want to do for America what I’ve done for Florida.”

“But my dad says all you’ve done is bully LGBTQ people, people of color and other vulnerable Floridians because you want those MAGA lunatics to elect you president.”

“Exactly. Ever since I was bitten by that radioactive ambition, I have lived my life by a simple creed.”

[ad_1] SANTA CLARA — Perhaps it’s too hyperbolic to predict what riches this 49ers’ roster will bring, specifically a Super Bowl win over the…

By adding Gunnar Henderson and other reinforcements, Orioles give playoff push a chance

[ad_1] At the beginning of August, with the Orioles in much the same position as they are now, the decision to trade away two…

Is Tyler Herro plus sweeteners too much for Donovan Mitchell? – The Mercury News

When I ask where they’re from, it doesn’t make me a bigot

[ad_1] Dear Amy: I have had a long-term love affair with foreign languages. I have studied several, and I speak one very well. My…

A team-by-team breakdown of the AAC – The Mercury News

[ad_1] Cincinnati Last year’s record: 13-1, 8-0 AAC With QB Desmond Ridder off to the NFL, sophomore Evan Prater will compete for the starting…

[ad_1] It doesn’t come as too much of a surprise to those who know Jared Bernhardt. The former Lake Brantley football and lacrosse star…

Why do they think it’s OK to have coffee in the office?

[ad_1] DEAR MISS MANNERS: I have been a lawyer for almost 30 years. Over the last few years, more and more clients or potential…

[ad_1] DEAR ABBY: Please don’t think I’m misogynistic, but whenever I see females, they’re constantly talking or scrolling on their cellphones. It seems like…