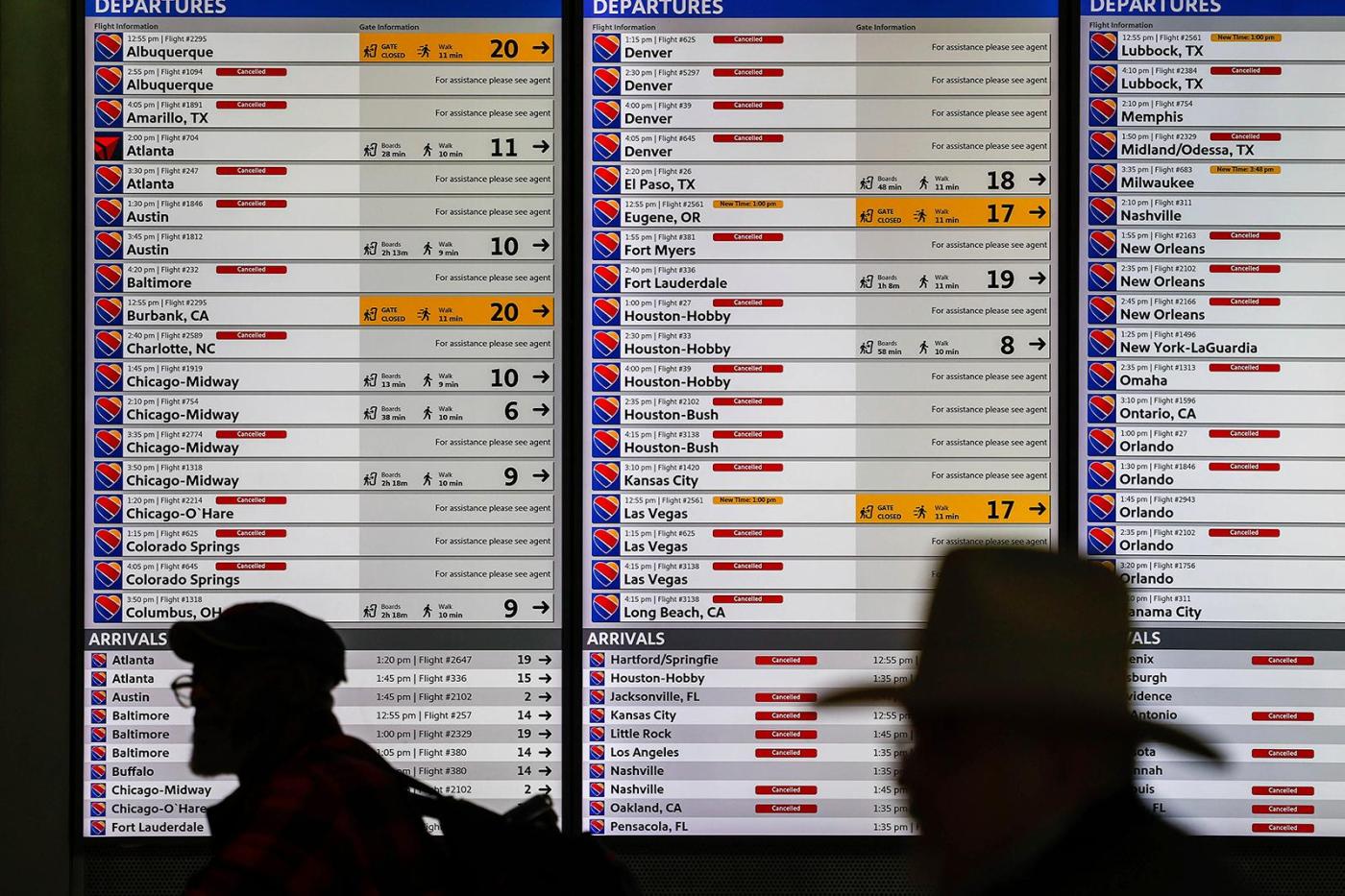 More than 1,700 flights were canceled and many more delayed on Tuesday as a brutal ice storm continued to hit parts of the South and central United States, bringing a second day of transport problems.

As wintry conditions affected an area from Texas to West Virginia, airplane tracking website FlightAware reported that more than 1,700 flights had been canceled within the US and 3,400 delayed by about 4 p.m. ET.

Texas has been particularly hard hit.

Three of the state’s airports — Dallas-Fort Worth International (DFW), Dallas Love Field (DAL) and Austin Bergstrom International (AUS) — are experiencing significant disruption, according to FlightAware, with Dallas Fort-Worth seeing the bulk of cancellations. As of 4 p.m. ET, more than 900 flights to or from DFW were canceled.

Southwest, American and regional carriers Envoy Air and SkyWest have been the most affected airlines.

Texas-based Southwest and American airlines had both canceled more than 500 flights by Tuesday afternoon, representing 14% and 17% of their schedules, respectively.

On Monday, Southwest, which experienced an operational meltdown over the holidays, canceled about 12% of its schedule. American canceled 6% of its flights. Across all carriers, more than 1,100 flights were canceled on Monday, with more than 6,000 delays.

On Monday, Southwest Airlines issued a winter weather waiver across a dozen airports in Texas, Oklahoma, Tennessee, Arkansas and Kentucky. The waiver applies to affected travel between January 30 to February 1.

American Airlines issued a waiver on Sunday for Dallas-Fort Worth International Airport (DFW) that applies to travel from January 29 to February 2.

DFW airport tweeted Tuesday that it is well prepared for the winter weather: “Airport runways, roadways, bridges, and pedestrian walkways have been and will continue to be treated for any potential ice to ensure safety.”

There’s a winter storm warning in effect for a large portion of Texas, including the Dallas-Fort Worth area, until 6 a.m. Central Time on Thursday, February 2.

The heaviest ice accumulation is forecast across large portions of Texas, which could see one- to three-quarters of an inch through Thursday morning. One-quarter inch of ice is possible across a wider swath of the region, including southern Oklahoma, Arkansas, northwestern Mississippi and parts of Tennessee.

“I encourage Arkansans who are experiencing winter weather to avoid travel if possible and heed the warnings of local officials,” Arkansas governor Sarah Huckabee Sanders tweeted on Monday.

[ad_1] February’s arrival marks the start of the stretch run across college basketball and a make-or-break month for a quartet of Pac-12 teams. The…

[ad_1] “Crash, correction or chill” looks at economic and real estate trends that give hints about how deep housing’s troubles may be. Buzz: California…

[ad_1] It’s easy throwing shade at a city when you’re 1,250 feet tall. Just be ready for some blowback. Following a rough couple days,…

[ad_1] More than 1,600 flights were canceled and many more delayed on Tuesday as a brutal ice storm continued to hit parts of the…

George Santos tells Republicans he wants off of committees for now

[ad_1] Rep. George Santos told the House GOP conference on Tuesday behind closed doors he wants off of his two committees until his issues…

[ad_1] A 44-year-old Dublin man was shot and killed in San Francisco’s Potrero Hill neighborhood on Saturday, according to police. At 8:20 p.m., officers…