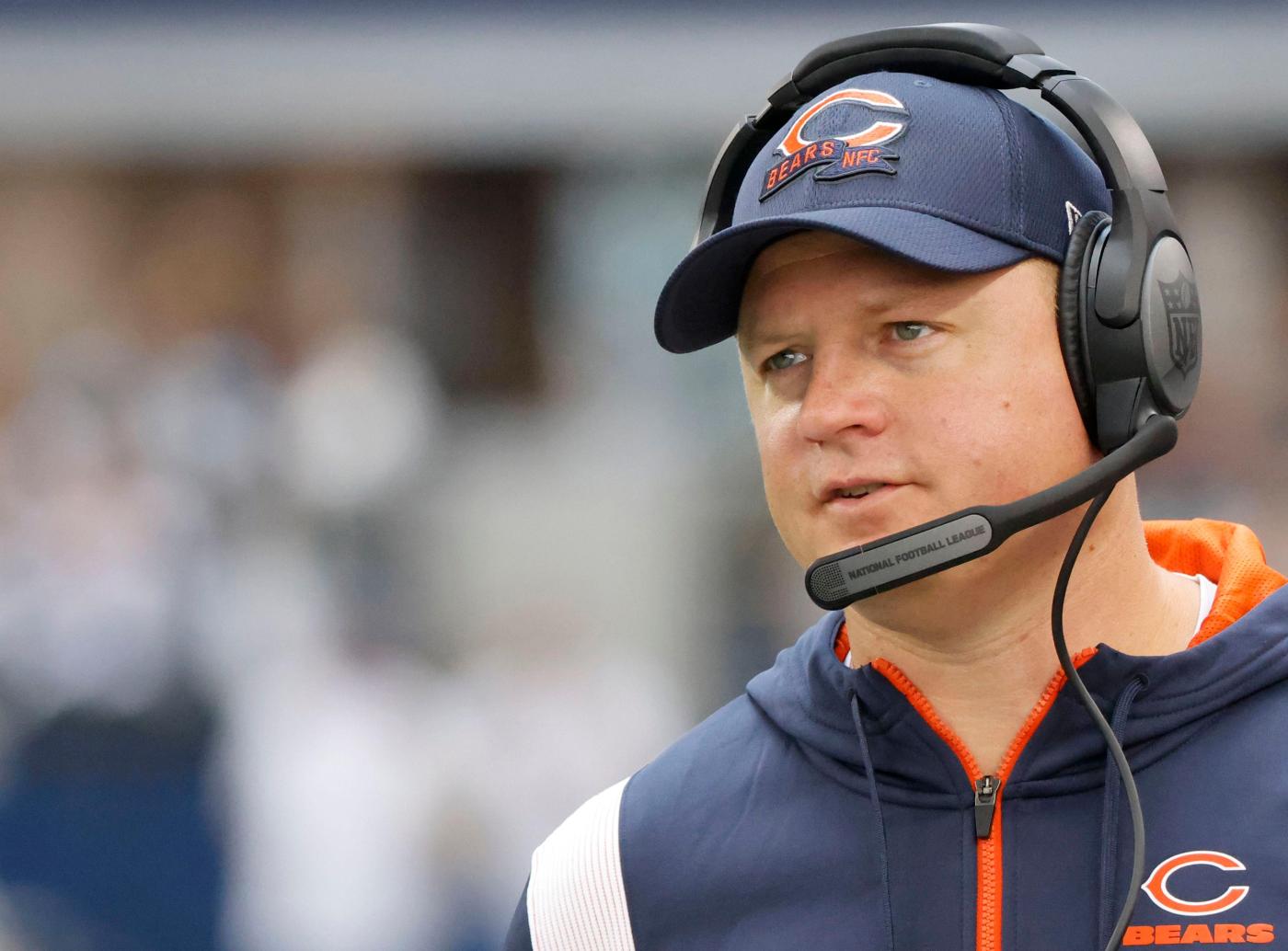 Underneath, he wore a T-shirt from Veets — a bar at the heart of everything that happens during Senior Bowl week — and Getsy posed with Tim Zetts, the Bears assistant tight ends coach, for a photo at midfield.

Getsy, the head coach of the American roster and one of four Bears assistants coaching this week, is making the most of the experience. It’s a chance for exposure, some networking and most important an opportunity to be a trusted voice in pre-draft evaluations.

It’s not the same as being an NFL head coach, but Getsy was charged with planning out the week — an important task to gain experience with for the next time he’s in the cycle of head-coaching candidates. The Denver Broncos interviewed him for their top spot a year ago.

“The main thing is to find a way to get our football team better,” Getsy said. “And this gives you a good opportunity to dive into the type of men they are.

“I’m in every meeting room. I am going to every position and getting to see how the guys interact and how they learn. Trying to get as much information on as many of these guys as possible.”

He said he found himself stepping back at moments during practice and putting the coaching hat aside to evaluate players, who are learning the scheme on the fly and implementing it. College tape is king in the evaluation process, and combine results and medical information go a long way. But there are more pieces to the puzzle.

“See how fast they learn something and go out and perform it quickly,” Getsy said. “That is the world we live in. We can’t do the same thing every week. Have to be able to adapt.”

It was a challenge to learn the coaching staff assembled for the two rosters, with assistants from 16 of the league’s 32 teams. That makes a clear line of communication essential. It also meant the week off that Bears coach Matt Eberflus gave his staff was a full week of planning for Getsy.

“The exposure to the players is the main reason (for being here),” he said. “But to be able to meet other coaches and kind of learn from them, and then on top of that maybe give them something, that part of it is the best. The networking part, getting to see good, young coaches, it has been a tremendous opportunity.”

Senior Bowl director Jim Nagy called Getsy “really easy to deal with” and credited Getsy with getting two offensive line coaches for each roster. Of course, that’s a position the Bears will be looking at closely.

Nagy, a longtime NFL scout, shared a funny anecdote of how his request for two O-line coaches initially was denied.

“It didn’t happen. I lobbied for it, I got shot down. And the next day I got a call from Luke and he was like, ‘I don’t know how we’re getting through the week with only one offensive line coach.’ We see a lot of things the same.”

With Getsy pushing for more help in the trenches, the league agreed to it.

As far as the Bears and working to help quarterback Justin Fields, Getsy said the staff hasn’t started a deep dive into the specifics of the offseason plan.

”When we get back next week, we’ll begin that phase,” he said. “We’re putting it all together, so when I get back we can hit that running.

“We took that time to do exit interviews and I spent a lot of time with each guy. I made sure I spent 20 to 30 minutes with each guy to really dive into the process and make sure we’re giving them everything they need to be successful.”

Bear down (in Mobile)

[ad_1] Submit your letter to the editor via this form. Read more Letters to the Editor. NWS could workfor A’s ballpark Now that Concord…

Aaron Rodgers touts new Jets OC Nathaniel Hackett; says decision on playing in 2023 could be made in ‘couple of weeks’ – The Mercury News

[ad_1] There has been a lot of speculation about the possibility of Aaron Rodgers being traded to the Jets this offseason. Last week, the…

[ad_1] The statewide Sierra Nevada snowpack — the source of nearly one-third of California’s water supply — is at its highest level since 1995,…

How to see ‘green comet,’ making closest flyby of Earth in 50,000 years

[ad_1] You may not need binoculars or a telescope to see C/2022 E3 (ZTF), the green comet discovered this past March, when it makes…

[ad_1] SANTA CLARA — Trey Lance stood at his locker on one side of the 49ers’ locker room, speaking for the first time to…

[ad_1] President Joe Biden intends to end the COVID-19 national and public health emergencies on May 11, the White House said Monday. That means…

DeMeco Ryans to be Texans’ next coach, per report

[ad_1] The 49ers are in the market for a new defensive coordinator. DeMeco Ryans, who took over the 49ers’ defense under Kyle Shanahan in…