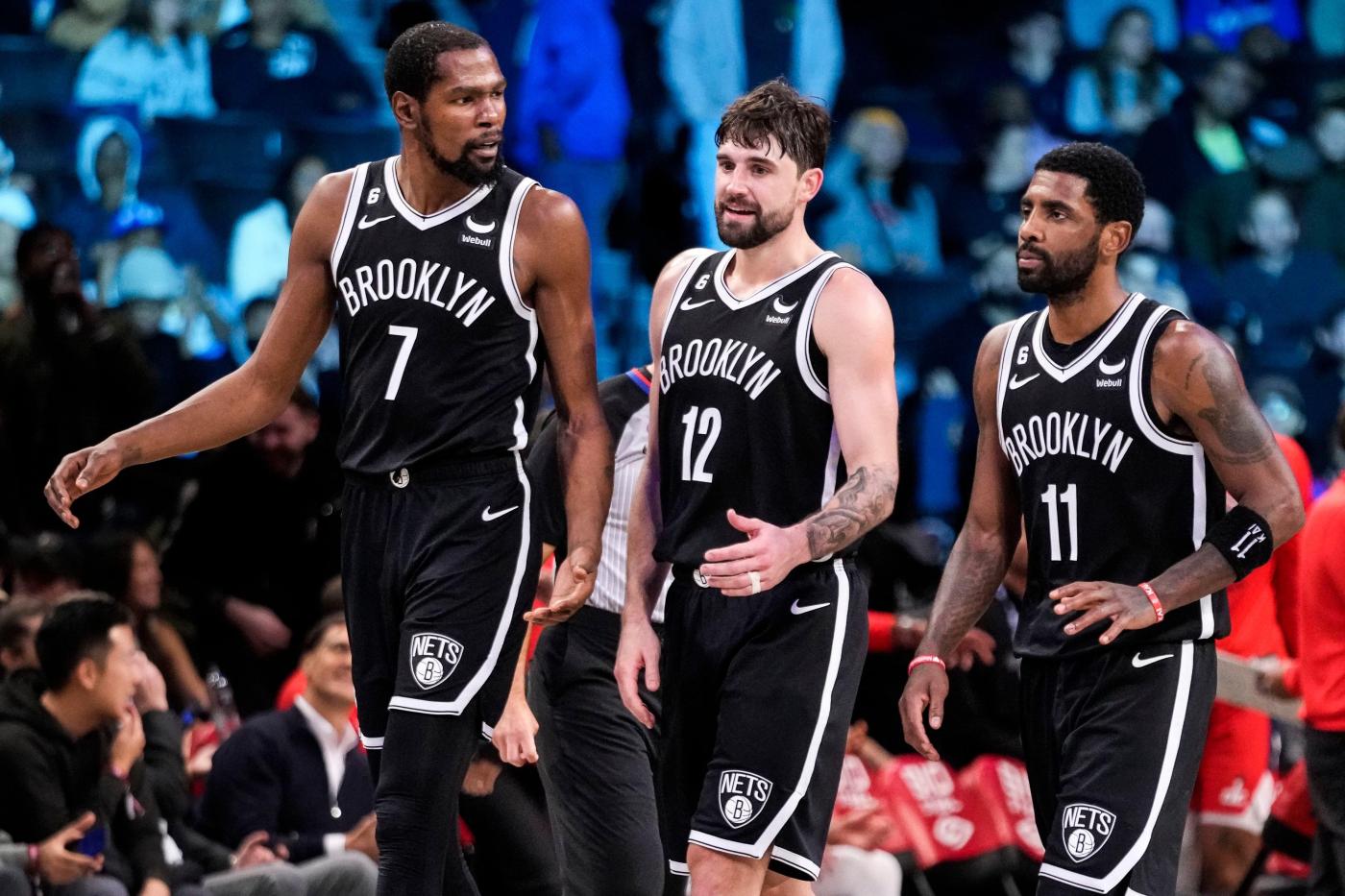 It felt like a game the Nets should have won handily — probably because the last time they played the Wizards, they set a new scoring record at Capital One Arena.

Kevin Durant got hot early and Joe Harris broke free from his recent cold streak. The game felt like Brooklyn’s for the taking.

Rarely, if ever, though, is anything exactly as it feels or seems at Barclays Center. On an explosive scoring night that featured MVP chants raining down on the best basketball player in the city, the Nets had to scratch and claw their way to a 113-107 victory that moves them above .500 for the first time all season.

And they didn’t truly put up a fight until the bottom of the third quarter.

Durant scored 39 points on 13-of-20 shooting from the field. Just weeks after he broke Wizards C Daniel Gafford’s ankles with a nasty hesitation-crossover-pullup combo, he had the remainder of the Wizards’ starters on skates.

Kyle Kuzma slipped to the ground as Durant split a double. Deni Avdija stumbled a bit before fouling Durant on an and-one jump shot. It was equal opportunity employment for any defender who applied to the job of the night: slowing down one of the most vaunted scorers in NBA history.

Therein lies the roadblock for this Nets team in pursuit of an ever-so evasive NBA championship — or a deeper playoff run than their “Seven-Eleven” era best second-round exit.

Durant is an all-world talent, and Kyrie Irving is a threat to go for 30 any given night. The remainder of the pieces on a stacked Nets roster are still acclimating to one another.

Case in point: As Ben Simmons (calf) and Yuta Watanabe (hamstring) project to each miss another week of action, veteran forward TJ Warren is set to rejoin the action Friday against the Toronto Raptors.

As a result, the Nets look disjointed for stretches on both ends of the floor. They are fighting to survive the limited minutes Durant needs to rest on the sidelines in order to recharge to dominate his individual matchup. Even in the minutes Durant plays, the offense sputters when the ball leaves his hands.

In the minutes he’s on the bench, it becomes the Wild Wild West.

After Durant played the entire first quarter, Jacque Vaughn called a timeout 33 seconds into the second after Wizards G Monte Morris got to the rack unbothered.

That happened over and over again and was Vaughn’s third timeout in the game’s opening 13 minutes. Paint defense has been an Achilles heel for a Nets team with only one true playable big man.

As a result of their roster construction, the Nets play small. It doesn’t always work, especially when Simmons is out.

Star guard Bradley Beal came off a screen and drove freely to the rim with a one-handed dunk. Durant flailed his hands and shook his head in frustration.

That, and his scoring, were the constant for the night.

Much of that frustration is in the team’s inconsistent ability to generate defensive stops — and if they do force a miss, the added grievance comes from this team’s inability to crash the glass. The Nets entered Wednesday night ranked second-to-last in rebounds. The Wizards won the battle on the glass, 51-35. Their 14 offensive rebounds translated into 25 second-chance points.

Nic Claxton finished with just seven points and eight rebounds. It became clear, early, he was going to struggle against the once lanky Kristaps Porzingis.

Porzingis has done what Claxton must continue: He has put on the body mass that allows him to be a force in the paint and on the glass. The ex-Knick tallied 27 points and 19 rebounds. Beal finished with 25 points on 10-of-20 shooting and Kyle Kuzma added 25 points.

A win is a win, and the Nets will take them as they come, especially after digging themselves a 2-6 hole to start the season. This season, though, is about more than beating a Washington Wizards tram projected to make the playoffs for the fourth time in five seasons.

It’s about being the last team standing and going toe-to-toe with teams like the Milwaukee Bucks and Boston Celtics.

Twenty-one games in, the Nets aren’t on that level. They still have a long way to go before arriving at the destination.

This was about trying to keep pace, with the Boston Celtics scoring at a pace that would have tested the Miami Heat on their…

By DARLENE SUPERVILLE (Associated Press) WASHINGTON (AP) — Butter-poached Maine lobster, beef with shallot marmalade and an American cheese trio will be served when…

The Orlando Magic are still far from whole, but they got a lot closer to resembling their full selves vs. the Atlanta Hawks. With…

The Sharks allowed a go-ahead goal to Pierre Engvall with 2:27 left in the third period in a 3-1 loss to the Toronto Maple…

The Chicago Bulls still don’t have an answer on Lonzo Ball. It has been nearly a year since Ball initially injured his left knee…

Running off at the typewriter … Understandably, there is a lot of talk about Anthony Richardson leaving the University of Florida for the big…

OBJ would help, but Saquon Barkley is the offensive weapon Giants must get going – The Mercury News

Buckle up. Odell Beckham Jr.’s free agent tour starts Thursday with the Giants. He is scheduled to fly into the area Thursday morning. Giants…

A son of former NFL quarterback Jon Kitna was arrested Wednesday on five child pornography charges. Jalen Kitna, 19, was the backup quarterback for…

Ravens quarterback Lamar Jackson was a limited participant in Wednesday’s practice with a quadriceps injury. Jackson left practice early to receive treatment and did…