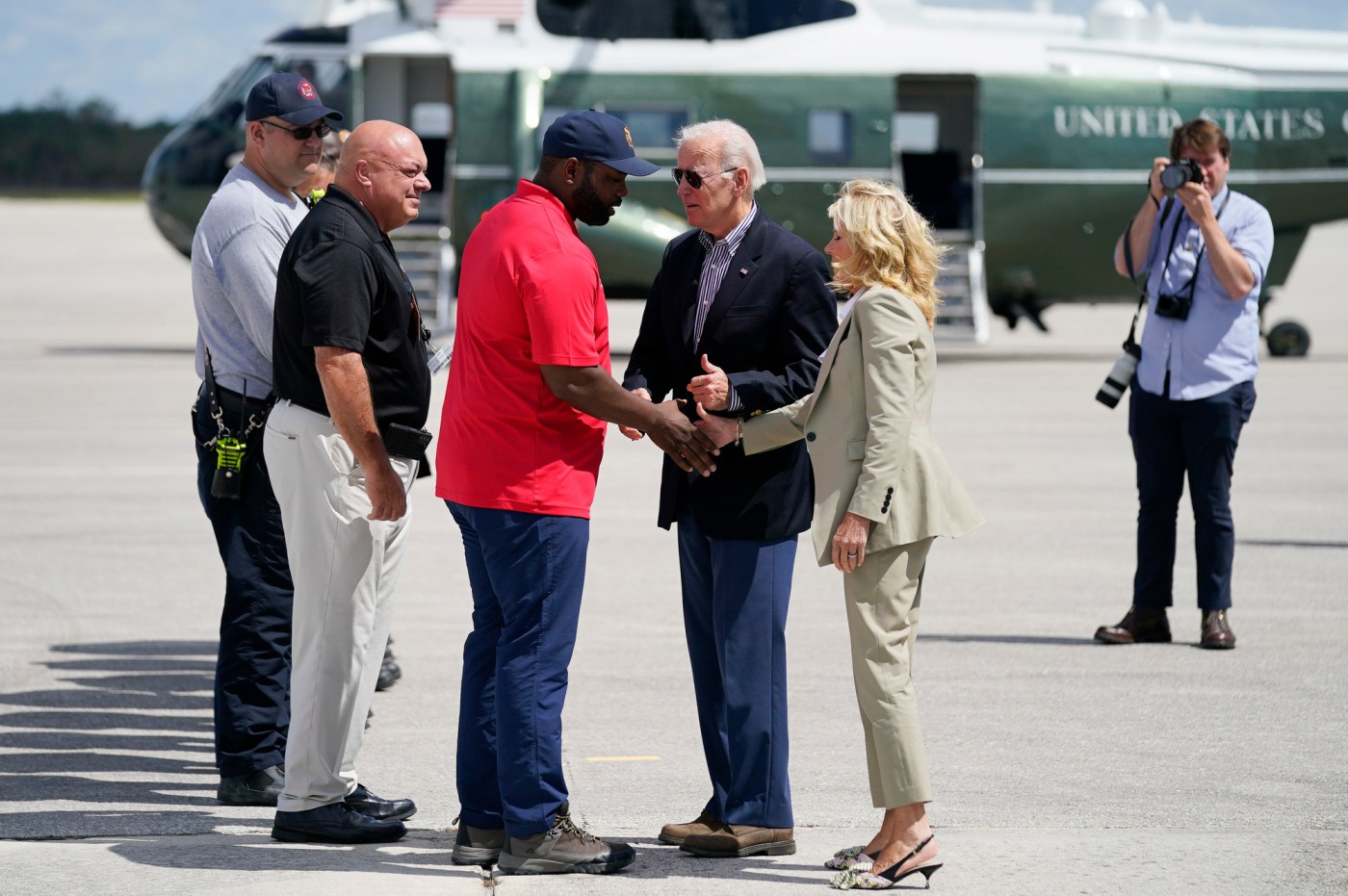 FORT MYERS, Florida — President Joe Biden toured hurricane-ravaged areas of Florida on Wednesday, surveying storm damage by helicopter as he pledged that federal, state and local governments will work together to help rebuild homes, businesses and lives — putting politics on mute for now.

Hurricane Ian has resulted in at least 84 people confirmed dead, including 75 in Florida, and hundreds of thousands of people wait for power to be restored. Ian’s 150 mph winds and punishing storm surge last week took out power for 2.6 million in Florida. Many people still are unable to get food and water.

With the midterm elections just a month away, the crisis was bringing together political rivals in common cause at least for a time.

Joining Biden in Florida will be two of his most prominent Republican critics: Florida Gov. Ron DeSantis and Sen. Rick Scott, according to the White House and Scott’s spokesman. Other state and local officials, including Republican Sen. Marco Rubio, are accompanying Biden. White House press secretary Karine Jean-Pierre suggested it would be inappropriate for them to focus on political differences.

“There will be plenty of time, plenty of time, to discuss differences between the president and the governor — but now is not the time,” Jean-Pierre told reporters at a White House briefing. “When it comes to delivering and making sure that the people of Florida have what they need, especially after Hurricane Ian, we are one. We are working as one.”

Before the storm hit, the president had intended to visit the Florida cities of Orlando and Fort Lauderdale last week, where he planned to stress his efforts to strengthen Social Security and Medicaid. Biden has accused Scott of wanting to end both programs by proposing that federal laws should expire every five years, although the Florida senator has said he wants to preserve the programs.

Biden and DeSantis have had a multitude of differences in recent years over how to fight COVID-19, immigration policy and more. In recent weeks, they tussled over the governor’s decision to put migrants on planes or buses to Democratic strongholds, a practice that Biden has called “reckless.”

The hurricane changed the purpose and tone of Biden’s first trip to Florida this year.

The president is visiting an area especially devastated by winds and surging tides. Boats, including huge yachts, were capsized and hurled inland.

As water receded, the destruction at Fort Myers’ Fisherman’s Wharf become evident. Homes and businesses lay in ruins amid debris and muck.

The wharf lies on one side of the bridge that leads into Fort Myers Beach, which was brutalized by the Category 4 storm. FEMA Administrator Deanne Criswell told reporters on Air Force One Wednesday that the cost of rebuilding will be huge.

“It will certainly be in the billions and perhaps one of the more costly disasters that we’ve seen in many years.”

DeSantis made a point Wednesday of praising FEMA along with local and state agencies, saying coordination among them has been exceptional during Ian’s aftermath.

“There’s been less bureaucracy holding us back in this one than probably any one I’ve ever seen,” DeSantis said a briefing in Matlacha. He gave a 30-minute midday briefing on hurricane recovery efforts, including news that running water had been restored through much of the affected zone.

The White House message of bipartisan unity marks a difference from Biden’s predecessor, Donald Trump, who at times threatened to withhold aid to Democratic officials who criticized him, including Democratic Govs. Gavin Newsom of California and Andrew Cuomo of New York.

Trump threatened to withhold federal money from California after wildfires, saying its state officials were to blame for the deadly conflagrations, tweeting in 2018: “Billions of dollars are given each year, with so many lives lost, all because of gross mismanagement of the forests. Remedy now, or no more Fed payments!”

Politicians’ responses to natural disasters have the power to make or break political careers.

As Florida’s governor for eight years, Jeb Bush maintained a steady response to a parade of hurricanes and was rewarded with sky-high approval ratings. The response by President George W. Bush and Louisiana lawmakers to Hurricane Katrina in 2005 hangs over their legacies.

Former New Jersey Gov. Chris Christie, the Republican who welcomed President Barack Obama to his state to survey Hurricane Sandy damage just days before the 2012 general election, said that during natural disasters “the best political strategy is to have no political strategy, to do your job.”