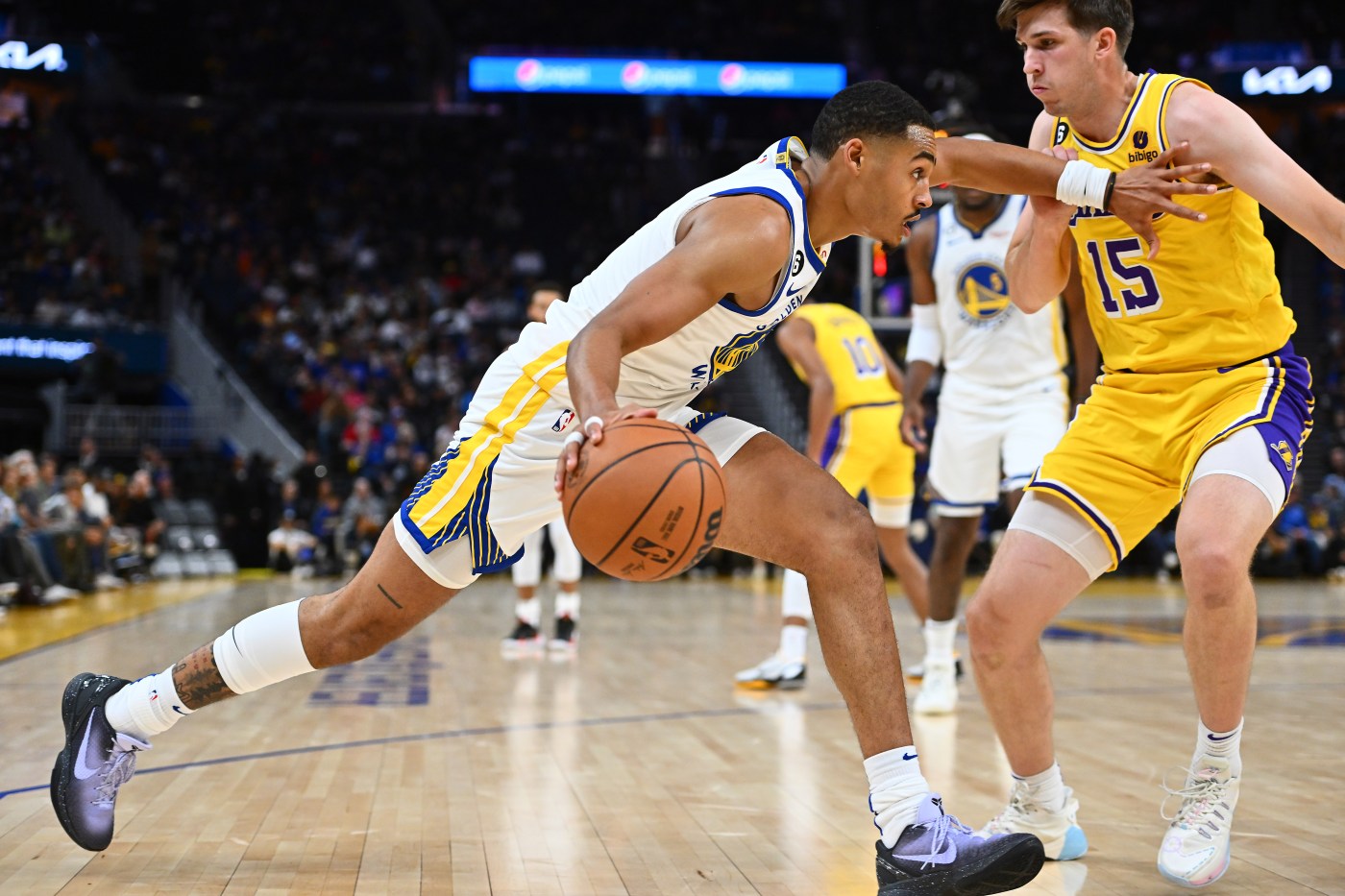 SAN FRANCISCO — Stephen Curry surprised Jordan Poole at center court ahead of the Warriors’ preseason game against the Lakers Sunday to present him a cylinder glass trophy for having the best free-throw percentage in the league last season.

It was a precious moment to witness as the old guard honored the new guard. The two smiled and laughed before Curry stepped away and pointed at Poole, who soaked in the applause of the Chase Center crowd.

And then in the Warrior’ 124-121 preseason loss to the Lakers, it was Poole who packed the punch for Golden State.

Poole, who again started in place of Klay Thompson, exploded in the third quarter, helping the Warriors overcome an eight-point deficit at the half. The fourth-year guard showed off his crafty ballhandling scored 18 of his team-high 25 points in the third quarter. That includes an end-of-the-quarter explosion, where he scored 10 straight points in the final 3 ½ minutes.

On the Warriors’ last possession of the frame, a driving Poole, getting smothered by gold Lakers jerseys, dished the ball to James Wiseman for a dunk. It was Poole’s third assist in 12 minutes and sixth of the game.

Poole, who didn’t play the fourth, was the star of the game for the Warriors and seemed unfazed by the controversy surrounding a practice altercation between him and Draymond Green last week.

Poole has remained the ultimate professional after getting violently punched in the face by Draymond Green during Wednesday’s practice, Poole returned to the court and finished his workout. He showed up to practice the next day and the one after that.

What fueled the practice altercation remains unclear. Green said the video didn’t show the whole story and refuted a report that money was the root of his frustrations.

“I don’t count other people’s pockets,” Green said Saturday. “The one thing I can assure you is that had absolutely nothing to do with anything.”

But it’s hard to overlook the reality of the situation. Poole, 23, is in the market to make as much on this next contract as Green, 32, has made playing after a decade in the league (which is just shy of $130 million, per Spotrac.) Poole is the face of the next generation of Warriors and Green is on the backend of his career.

Green is taking an indefinite leave from the team. It’s unclear where Poole and Green stand, but the grizzled veteran has made it clear he would like to make amends. How long that might take is to be determined.

The Warriors have two more preseason games before beginning their season with a championship ring and banner ceremony Oct. 18 against the Lakers. There’s no guarantee Green will be at the season opener.