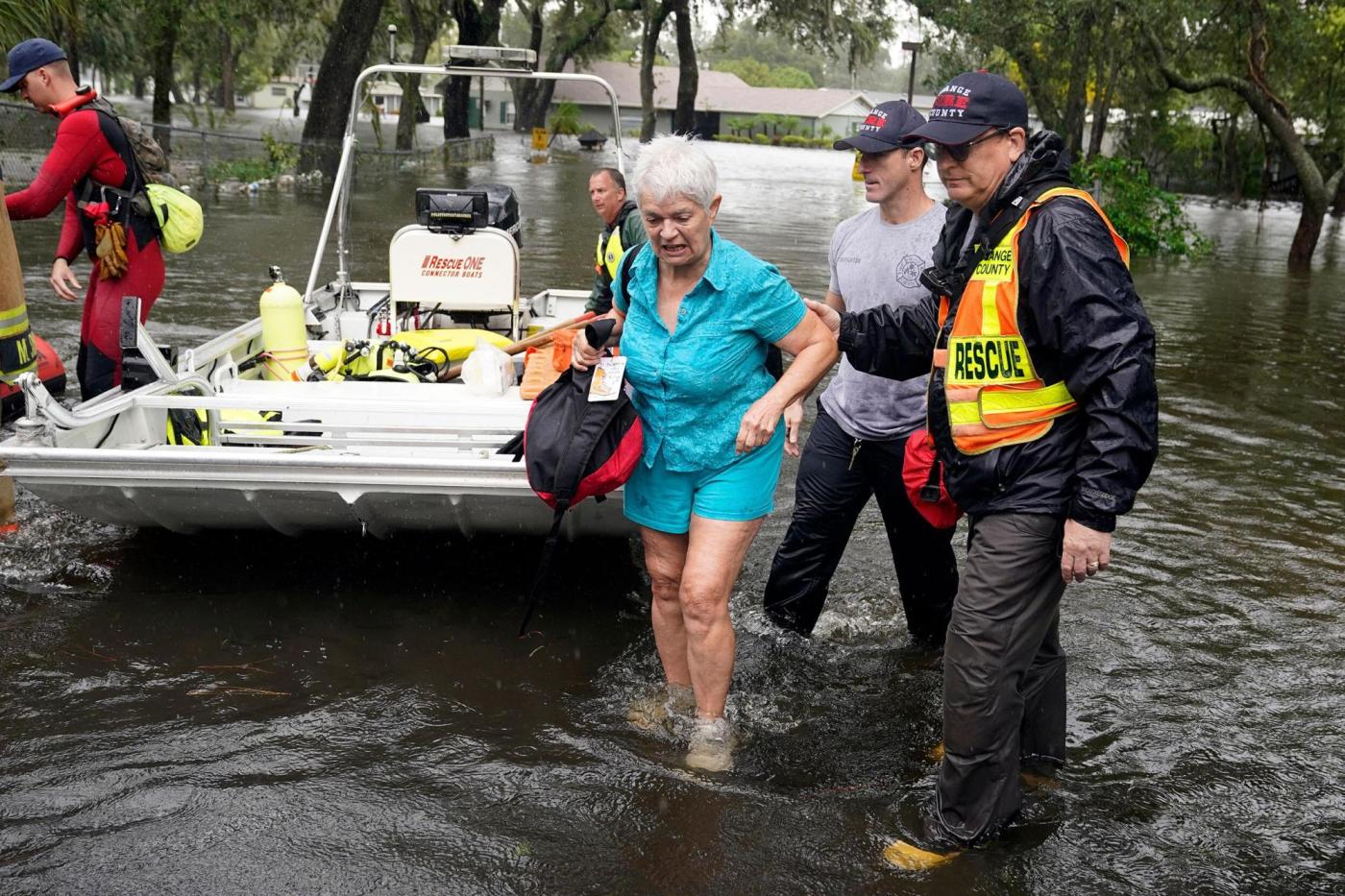 Ian has been downgraded to a post-tropical cyclone after pummeling South Carolina Friday afternoon with destructive winds and life-threatening storm surge, and after killing at least 45 people in Florida, leaving behind a trail of apocalyptic destruction.

The storm, which made landfall near Georgetown as a Category 1 hurricane, continues to pack winds of 70 mph as it moves farther inland over the Carolinas.

“It should be emphasized that just because Ian has become a post-tropical cyclone that the danger is not over,” the National Hurricane Center warned. “Dangerous storm surge, flash flooding and high winds are still in the forecast from this cyclone.”

Reports of property damage, power outages, and water-rescue calls have multiplied as officials across the state continue to issue dire warnings to residents to stay inside.

A hurricane warning was issued from the Savannah River at the Georgia-South Carolina state line to Cape Fear, North Carolina. Considerable flooding is possible from seawater and rain, especially in parts of coastal South Carolina, where storm surge up to 7 feet and 4 to 12 inches of rain could hit, forecasters say.

And a tornado watch covering nearly five million people is in effect until 10 p.m. ET for parts of the Carolinas and Virginia, including Myrtle Beach, Wilmington, Norfolk and Virginia Beach, according to the Storm Prediction Center.

More than 200,000 power outages were reported in South Carolina, as well as more than 138,000 in North Carolina, by 3:50 p.m. ET, according to PowerOutage.us. In Virginia, more than 17,000 customers have lost power, largely on the east and south sides of the state.

Pawleys Island Mayor Brian Henry told CNN the water has receded on the two causeways connecting the island to the mainland. No one is allowed back on the island until the damage has been assessed, Henry said, adding there is a “tremendous amount of debris strewn across the island on the roads.”

“It’s a pretty scary sight,” Myrtle Beach Mayor Brenda Bethune said of Hurricane Ian. “I’m seeing way too many cars passing by. And I think people just don’t realize how dangerous it is to be out in these types of conditions. We’ve seen so many people’s cars get stuck and emergency personnel has to go out and rescue people.”

Shelters in Charleston County will remain open until 4 p.m. on Saturday, the county said in a news release. Buses will start taking people from the shelters back to the original pick-up locations Saturday morning.

“A lot of prayers have been answered,” South Carolina Gov. Henry McMaster said. “This storm is not as bad as it could have been, but don’t let your guard down yet. We are not out of the woods, there is water on the roads, still heavy winds, and it is still dangerous in many parts of the state.”

Charleston International Airport’s airfield closed Friday because of high winds, the airport said. And Myrtle Beach residents are urged to stay inside during the storm, Mayor Brenda Bethune told CNN.

Coastlines along Georgia and South Carolina may sustain significant alterations because the powerful waves and storm surges brought by Ian could inundate coastal sand dunes, according to the US Geological Survey.

In addition to flooding communities behind the dunes, the storm may push sand back and deposit it inland, which could “reduce the height of protective sand dunes, alter beach profiles and leave areas behind the dunes more vulnerable to future storms,” the agency said.

In Florida: At least 45 reported dead

Meanwhile, Florida confronts the dizzying destruction Ian wrought through much of the peninsula Wednesday and Thursday after it smashed into the southwest coast as a Category 4 storm and plowed through central and northeastern areas.

At least 45 deaths have been reported in the state. Homes on the coast were washed out to sea, buildings were smashed throughout the state, and floodwater ruined homes and businesses and trapped residents, even inland in places like the Orlando area.

Hundreds of rescues have taken place by land, air and sea, with residents stuck in homes or stranded on rooftops, and searchers have made many wellness checks, especially in the Fort Myers and Naples areas, where a storm surge inundated streets and homes.

Roger Desjarlais, manager of Lee County, which encompasses Fort Myers, told CNN Friday it is not an overstatement to say Hurricane Ian decimated parts of the area and “there has to be many fatalities.”

“It looked as though someone had just dropped from the sky picked up hotels and buildings and took them away. So much so that in many places there wasn’t even debris,” Desjarlais said. “We also know that not as many people evacuated from those islands as we had hoped for. We know there has to be many fatalities yet to be accounted for.”

President Joe Biden continued to pledge federal support for Florida as it deals with the devastation caused by the storm, which he said was “likely to rank among the worst … in the nation’s history.”

“We’re just beginning to see the scale of that destruction,” Biden said, adding the largest team of search and rescue experts “in recent history” was currently deployed to the state. “It’s going to take months, years to rebuild.”

And now, the storm’s aftermath poses new, deadly dangers of its own. Some standing water is electrified, officials warned, while maneuvering through debris-strewn buildings and streets — many without working traffic signals — risks injury. Lack of air conditioning can lead to heat illness, and improper generator use can cause carbon monoxide poisoning.

In North Port between Fort Myers and Sarasota, Rosanna Walker stood Thursday in the flood-damaged home where she rode out the storm. Part of her drywall ceiling was hanging down.

“And all of a sudden, the water was coming in through the doors — the top, the bottom, the windows over here,” she told CNN. “It’s all in my closets; I’ve got to empty out my closets.”

Claudette Smith, the public information officer for the sheriff’s office in Charlotte County, just north of Fort Myers, told CNN the county is in desperate need of help as emergency services continue to be inundated

“We need everything, to put it plain and simple. We need all hands on deck,” Smith said. “The people who have come to our assistance have been tremendously helpful, but we do need everything.”

Many members of the community are without homes, water, and electricity, and there is currently only one operating hospital in the county.

Here’s what to know about the destruction in Florida:

• Deaths in Florida: At least 45 deaths suspected to be related to Ian have been reported in Florida, including 16 in Lee County, 12 in Charlotte County, eight in Collier County, four in Volusia County, one in Polk County, one in Lake County, one in Manatee County and two in unincorporated Sarasota County, according to officials. Unconfirmed death cases are being processed by local medical examiners, who decide whether they are disaster-related, state emergency management Director Kevin Guthrie said.

• Power outages: Florida had more than 1.6 million power outages as of Friday afternoon, according to PowerOutage.us. Most counties with the highest percentage of residents without power lie in the southwest, including Lee, Charlotte, DeSoto and Hardee.

• Historic flooding in Florida: Record flooding was recorded across central and northern Florida, including at least three rivers hitting all-time flood records. Officials in Orlando warned residents of dangerous flooding, which exceeded a foot in some areas.

• Hundreds of rescues and thousands of evacuations: The US Coast Guard has performed over 275 rescues in Florida, Rear Admiral Brendan McPherson told CNN. More than 700 rescues have happened across Florida so far, the governor said Thursday, and thousands of evacuees have been reported. In Lee County, a hospital system had to evacuate more than 1,000 patients after its water supply was cut off, while other widespread evacuations have been reported in prisons and nursing homes. In Fort Myers, the fire chief was “pretty comfortable” by Friday morning everyone needing help there had been rescued, Mayor Kevin Anderson said. The Coast Guard is treating this like a military operation searching “block by block to make sure that everybody gets out.”

• Much of Fort Myers Beach obliterated: A helicopter flight over Fort Myers Beach shows utter devastation: empty or debris-littered lots where homes and businesses used to be and boats tossed into mangroves. “You’re talking about no structure left. … You’re talking about homes that were thrown into the bay. This is a long-term fix, and it’s life-changing,” Lee County Sheriff Carmine Marceno said.

• Coastal islands isolated from mainland: Sanibel and Captiva islands in southwest Florida are cut off from the mainland after several parts of a critical causeway were torn away. At least two people were killed in the storm in Sanibel, and the bridge may need to be completely rebuilt, local officials said. Chip Farrar, a resident of the tiny island of Matlacha, told CNN 50 feet of road essential to reaching the mainland bridge has been washed out, and a second nearby bridge has also collapsed.

• Insured losses in Florida may be enormous: Ian may have caused as much as $47 billion in insured losses in Florida, according to an estimate from property analytics firm CoreLogic, which could make it the second-most expensive storm in the state’s history when adjusted for inflation after 1992’s Hurricane Andrew. 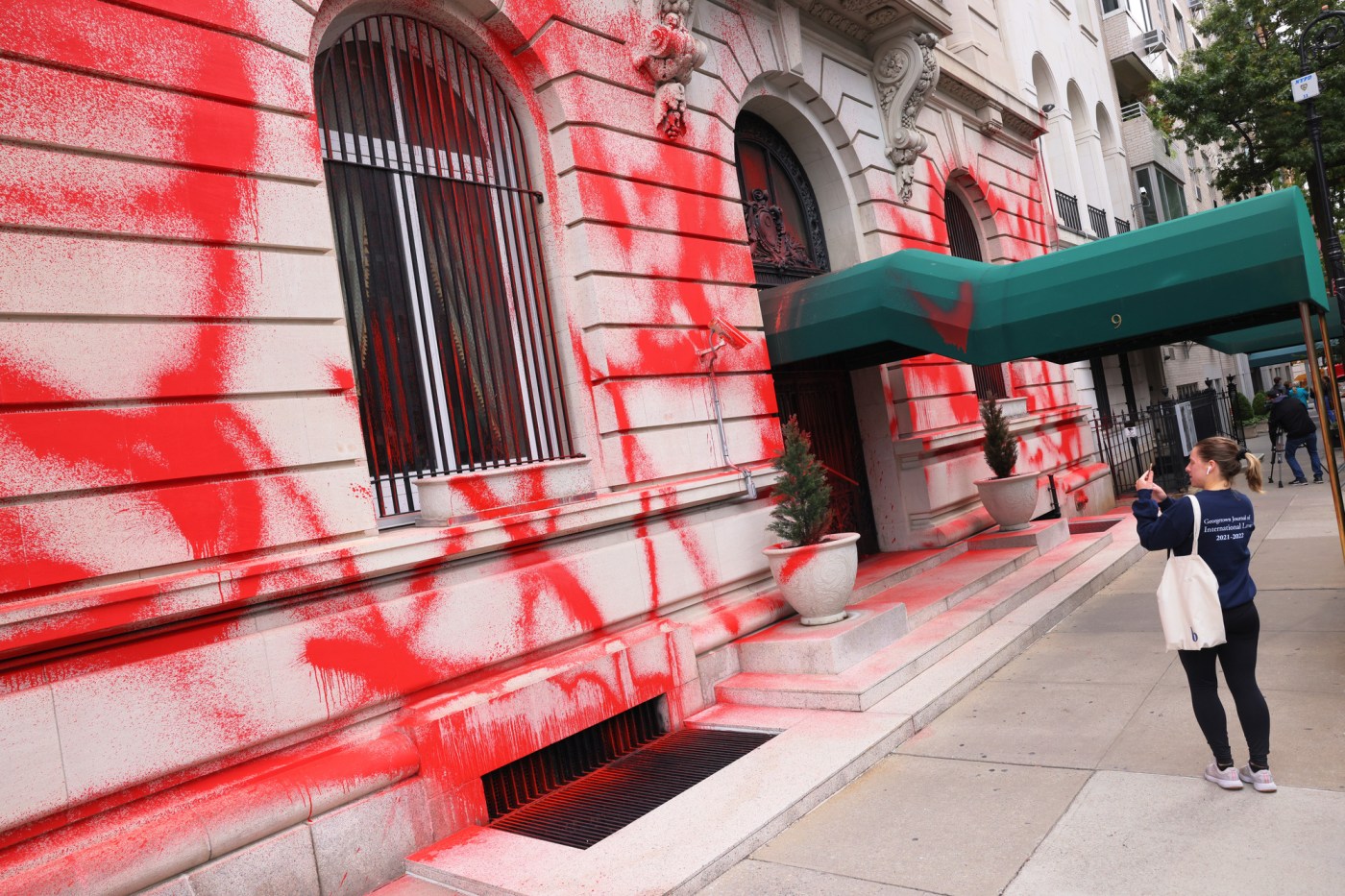 NEW YORK >> The Russian Consulate in New York was vandalized with spray paint early Friday morning, according to police.

Officers responded to a 911 call about vandalism on the facade of the building, located on East 91st Street, just off Fifth Avenue, about 1:30 a.m. on Friday, police said.

No words were visible, just wide streaks of red paint sprawled across the ground floor facade of the building, covering windows and a set of double doors. But some on social media and a few people passing by interpreted the vandalism to be a protest of Russia’s ongoing war against Ukraine.

The vandalism appeared just hours before President Vladimir Putin of Russia gave a belligerent speech in Moscow about the annexation of four regions in Ukraine.

Some of the people who stopped in front of the consulate on Friday morning expressed their support for Ukraine.

Maria Phillips, 39, who was born in what was then the Soviet Union and now lives is London, took photos of the scene.

“I feel moved by it,” she said. “It obviously stands for blood, which Russia is responsible for, killing Ukrainian people and sending people to die in the war, which is pointless and cruel and stupid.”

Marina Kovalenko, 57, a personal trainer who lives nearby, saw photos of the paint on social media and hurried over to catch a glimpse. To her, it was a work of art, and she commended the vandals and offered to bail them out if they were caught.

There have been no arrests, and the episode was deemed a possible bias incident, police said.

“I always was thinking to spray the flag, but I’m short,” Kovalenko joked. “And I know it’s criminal.”

She said she moved to the United States from Russia 11 years ago, but her family remained there. She added that she thought the paint should remain until Russia’s government changed course.
“I wish I was brave enough to do it myself,” she said.

Julia Krushelnysky, a Ukrainian American senior at the Spence School across the street from the consulate, teared up as she surveyed the scene. She said it had been very difficult for her to attend school daily as the war grinds on.

“It’s very emotional to have this very visual representation of the Russian consulate every day, something a little bit tough for me,” she said.

The Russian consulate referred questions about the incident to the U.S. State Department, which did not immediately respond to a request for comment. A sign on the consulate’s door said all appointments were canceled for the day.

This story appeared originally in the New York Times.